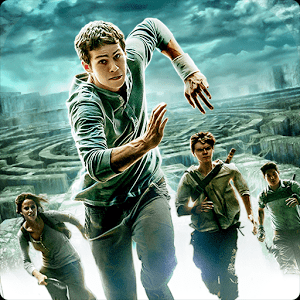 Maze Runner is a game with over 100 levels, based on the feature film of the same name. Caution: In app purchases, advertising and violence

This review of Maze Runner, The was completed by the Australian Council on Children and the Media (ACCM) on 10 February 2015.

This review of Maze Runner, The contains the following information:

The Maze Runner is an animated arcade runner where individuals play through various levels of increasing difficulty. The objective of the game is to collect items in order to unlock the next level, as well as beat timers in response to completing each level speedily. The skills needed centre mostly around reaction times and motor skills.

The app starts in a warehouse elevator moving upwards. It then explains that you have joined the Glades, and as a runner, your job is to search the maze, survive, and try to find away out. The app then begins by throwing players straight into the gameplay – players run through a maze with very tall rock walls, and are instructed to swipe left/right/up/down in order to move their character and not run into obstacles. If players do not do this, they will die and have to begin the run again. Unlocking the next section is done by collecting clues. Taping the screen repeatedly causes players to sprint. Players must reach the end of a level within a set time limit. It is possible to collect coins, as well as clues and other items during the run. In completing a run, they receive in-game coins and green gems. After finishing a level, players are told their time score, how much they earned, as well as how many clues they discovered. They are also informed that logging in via Facebook will allow them to compare their score with friends and other individuals across the world – they are incentivised to do this by being offered 5 green gems.

After completing the first run, players are welcomed to the Glade by a fellow comrade. He informs them that the Glade is their home, and is where they live, grow their own food, eat and train. Players are then free to explore each area, or to tap ‘run’ if you’re ready for the maze.

On the main menu screen, there is a settings bar that allows players to adjust the sound and display, receive notifications, log in via Facebook, restore purchases, etc. The main screen also gives players the option to select either ‘Gladers’ or ‘The Box’. If players select the former, they are taken to a screen that allows them to select which runner they would like to play as – they are also informed that runners may be upgraded, with things such as sprint boost, stamina boost, body armour, coin magnet and time boost (each of which can be purchased with in-game coins). Whilst one runner is unlocked already, another (with more speed and stamina) costs 50,000 coins to unlock. Another 5 runners require an in-app purchase of $4.99, whilst one runner can be obtained by spending 200 gems. Alternatively, The Box is where players may go to receive a daily reward. The gifts alternate between being coins and gems, and there is a small timer that counts down until the next reward can be obtained.

No gambling content found during the review of this game, however ads for gambling apps may be present.

There is an option to ‘Watch ads and earn gems’. Upon clocking this option, a random ad begins playing in a full-screen capacity – the first ad displayed at the time of this review was ‘myVegas Slots Free Casino’, which contains gambling imagery and sounds. After the video has finished, players have the option to download the app, replay it or close it. Players are rewarded with 5 gems for watching an ad. Once an ad has begun playing, it can be muted but not closed. The ads differ in length, with some being 10 seconds long, and others being 30 seconds. ‘Marvel Puzzle Quest’, ‘Clash of the Kings’, ‘Blood Brothers 2’ and ‘Stormfall Rise of Balur’ were among the other ads shown. These ads contain some content that appears violent and visually gory (with fighting taking place, and blood being shown).

After finishing a level, players are presented with something called a ‘reward for completing the mission’ in the form of an advertisement. The ad takes up most of the screen and must be closed by clicking on the phrase ‘I don’t want this reward’ before players can progress. At th time of the review, the ad was for a gambling app called SportsBet, and the ad states ‘Join now for a first bet bonus of up to $250’. If players close this, another pop-up appears that asks players for their gender and age bracket, so that players ‘may help us reward you better’ with appropriate ads. This type of ‘reward’ advertisement appears at the end of many levels, with a second screen popping up displaying an ad for Freebies Downunder – the ad states ‘Your reward: Access to hundreds of free coupons, you won’t believe how much money you’ll save’ in addition to brand logos such as Coca Cola, Woolworths, Liptons and McDonalds.

Before beginning certain levels, full-screen ads also occasionally appear that must be manually closed. For instance, there was an advertisement for ‘Zoosk’, a dating app – the advert showed photographs of 9 women, along with the text ‘Still single? So are we’.

There is also an optional link to the movie trailer that the app is based off, as well as a link to view advertisements for ‘More Games’ (this includes games such as Turbo Fast for children, OREO: Twist Lick Dunk, as well as Into The Dead – these apps are quite diverse in their themes and advertisement of known products).