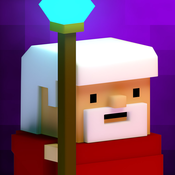 This review of Quest Keeper, The was completed by the Australian Council on Children and the Media (ACCM) on 30 April 2015.

This review of Quest Keeper, The contains the following information:

This is an endless runner game.

The Quest Keeper is an endless style runner game with different missions. The player collects coins, tries to navigate obstacles and avoid getting hit by spikes, blades and other dangerous items.

The Quest Keeper is an endless runner style game shown in blocky animation. The player is a little man and the aim of the game is to collect various artefacts for the wizard. The man continuously walks in one direction and the player must swipe left or right to dodge obstacles and collect coins. Coins can be used to buy more costumes for the character or to buy different worlds for the character to play in (see In App purchasing for more detail).

The obstacles can vary from the ground falling down around him, to swords, spiders and fire (see Other- Violence for more detail). If player gets hit by an obstacle or falls off the ledge the player dies. The player use coins or watches an advertisement to restart at a previous save point.

The Quest Keeper is a fun and sometimes addicting game. It can help develop children’s concentration and forward planning skills, as well as their fine motor and reaction skills.

The user can rate the app on iTunes or email the developers with a comment.

There is no gambling in the game itself but many of the advertisements feature gambling games.

The third type of advertisement does not get disabled. When the player dies and has run out of coins, to revive themselves, the player has the option of watching a full screen video advertisement in exchange for 50 coins. These advertisements usually play for 30 seconds and cannot be skipped once they have started.

None found in the game itself but the advertisements for other app games often include women in revealing clothing.

No game playing behavour which may be of concern to parent was found during this review.

Violence and Scary material. The game contains some cartoon violence of the man getting hit swords, falling off of ledges or being chased by spiders. There is no blood and gore involved but the man grunts when he is hurt and his heart icon flashes onscreen when he dies.