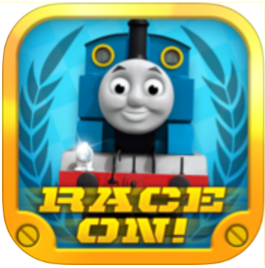 Thomas & Friends: Race On! Is an event based racing game inspired by the children’s TV series. Caution: In app purchasing

This review of Thomas & Friends: Race On was completed by the Australian Council on Children and the Media (ACCM) on 29 May 2016.

This review of Thomas & Friends: Race On contains the following information:

Thomas & Friends: Race On! Is a quick-time event racing game. The objective is to race trains around a track in either a time attack mode or a VS race mode. The skills required are reaction times, comprehension and motor skills.

When the app is first opened, players are shown a screen with three Thomas the Tank Engine characters and a Tap to Start button. In the bottom right hand corner, users can select and read the privacy policy of the app. When the player taps the screen, they are taken to a tutorial section where they are taken through the basic control scheme. Players are shown that they can select various trains and play either alone, or with their friends locally through split-screen. Races are played by tapping the screen as quickly as possible and sliding a finger across the screen during quick-time events. As players progress through the missions, they unlock other trains. Some of the areas and trains can only be unlocked through in-app purchasing.

When the player attempts to open the shop, they are presented with a basic mathematical equation. Entering this correctly allows the player to purchase in-app content packs either individually or as bundle packs. Single in game trains cost $2.99, with new unlockable maps costing $9.99 per map. A bundle pack of 5 trains costs $9.99 and a bundle pack of all the in-game content costs $22.99.