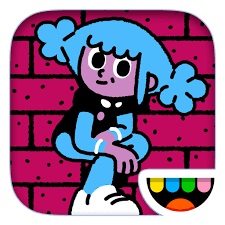 A dance game where players can dress dancers, choreograph their routine and watch them perform. Caution: In-app purchases and encouragement of violent/aggressive behaviour.

This review of Toca Dance was completed by the Australian Council on Children and the Media (ACCM) on 16 March 2017.

This review of Toca Dance contains the following information:

Both the free and paid versions were played including playing all ten characters in the paid version with different costumes and music combinations trialed.

This open-ended dance app offers players the creative licence to dress dancers and choreograph a dance routine by manipulating a dance instructor through swipes and taps. The dancers then perform their routine and the player can control the lighting effects and audience response, including booing, cheering and throwing items at the characters.

Play begins with the selection of up to three dancers. Hip-hop/Techno music played on a loop is audible throughout the game. The characters first enter a locker room where different costumes are available to dress them. Play continues with the characters in a dance class, where fine motor control is required to manipulate a dance instructor. Tapping on coloured dots (corresponding to different poses) and then swiping or tapping the instructor in different directions allows a routine to be choreographed. The characters follow the routine until the player taps the arrow to proceed to the performance. Play concludes with the dance performance where lighting effects and audience responses can be selected.

The opening scene in this game is a typical Hip Hop environment, complete with garbage and small fires, suggesting the location is “cool” with audible Hip Hop music and laughter, 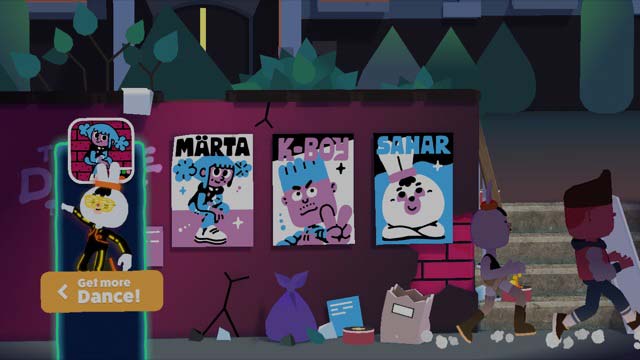 The characters then enter a locker room where different sets of outlandish costumes (including poo, neon, eyeball and skull costumes) are available, although there are only three sets of costumes in the free version.

The player can drag and drop the outfits onto the characters which appears to cause them some discomfort. The choreographing of the dance routine is the most engaging aspect of the game, although younger children may find manipulating the limbs of the teacher in a purposeful and intentional way, difficult to master.

The characters then proceed to the stage performance where the player can control lighting (paid version only), character appearance and audience response. The ability of the player to manipulate the head and body size of the characters by blowing them up or deflating them may be disturbing for younger players. Likewise, whilst the use of off-color humour (such as audible flatulence) may appeal to younger children, the themes such as encouraging the player to throw items including shoes (a deeply offensive act in some cultures), eggs, toilet paper and money at the performers are all problematic features of this game, making it unsuitable for young children. 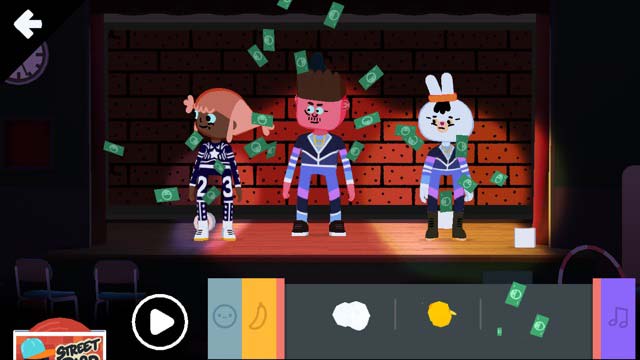 These aggressive acts are completely out of context and communicate tolerance of gratuitous violence for enjoyment. Parental co-play is also recommended for older children to address some of the themes.

The paid version is advertised on the home screen and is billed as offering:

This is accessed by entering your year of birth and a 15 year old is able to proceed to purchase.  This is easily achieved through trial and error. 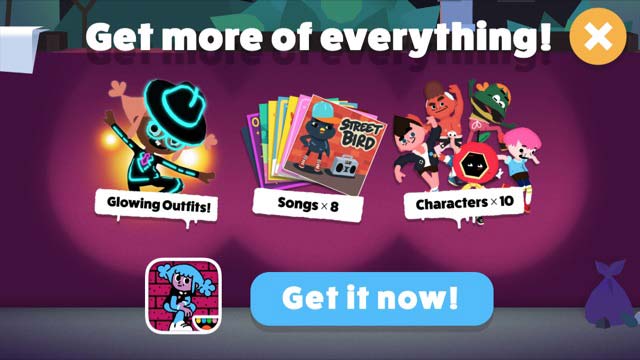