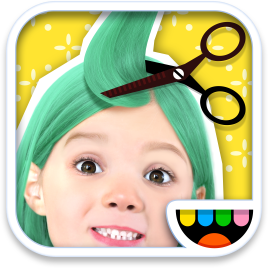 A role playing hairdresser app suitable for 5 year-olds and over.

This review of Toca Hair Salon Me was completed by the Australian Council on Children and the Media (ACCM) on 28 March 2014.

This review of Toca Hair Salon Me contains the following information:

This App gives children a virtual hair salon, where players are able to upload a photo of their face and become a player in the game. Players can then experiment with their hair, cutting, colouring, curling and designing hair and even making it grow.

A fun, role play App, with the player being a hairdresser, using the tools provided to create hair designs. Similar to the other Toco Hair tools (Toca Salon 2 and Toca Hair Salon Christmas Gift) in game play you are given a range of tools to use in the virtual hair dressing salon including scissors, razors, curling irons, a “tonic” that makes hair instantly grow and a range of colours. However, in a major difference is that when starting the game the player uploads a photo and so becomes part of the game, manipulating the hair of the image uploaded.  Similar to other Toca Hair Apps, as the hair is being played with, the photo character respond with noises and funny facial expressions.

Some parents may be concerned that this App could encourage children to cut their own hair or use items such as curling irons that could be considered unsafe – so this reviewer would suggest parents use this tool with children aged over four years and discuss their concerns.

Encouraging use of hair tools including scissors and curling irons may concern some parents.