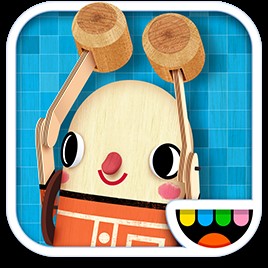 A role playing kitchen cooking app suitable for all ages.

This review of Toca Kitchen was completed by the Australian Council on Children and the Media (ACCM) on 28 March 2014.

This review of Toca Kitchen contains the following information:

This App puts the player in a virtual kitchen setting, allowing the player to choose a character and then manipulate, chop and cook a range of food items and then feed them to their character.

This App is designed to allow choice and has limitless options for play – after selecting a character the player then chooses virtual food to feed them (this can also be set as vegetarian). After selecting food, the player is able to “cook” the food using a range of techniques such as chopping, blending, microwaving or frying food and then feed the finished dish to their character. The character will respond to the food, either enjoying it or not eating it. The open nature allows for experimentation and exploration and the character reactions can be seen as fun and motivational. Players familiar with Toca Apps seem to recognise characters and some children observed demonstrated empathetic responses to them.

NOTE: this is very similar to Toca Kitchen Monsters – a free app that had a limited range of monster characters.

Some parents may be concerned about the simulated use of kitchen equipment such as knives, blenders and hot plates. This could be an opportunity to discuss these concerns and discuss kitchen safety.