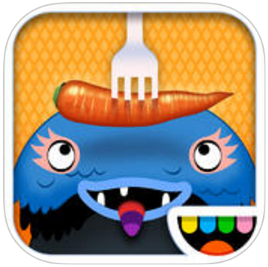 A role playing kitchen cooking app suitable for 5 year-olds and over. Caution: advertising

This review of Toca Kitchen Monsters was completed by the Australian Council on Children and the Media (ACCM) on 29 May 2016.

This review of Toca Kitchen Monsters contains the following information:

This app was reviewed for approximately 40 minutes.

Toca Kitchen Monsters is a cooking game for children. The objective is to create various different meals and feed them to monsters. The skills required are comprehension, motor skills, and pattern recognition.

When the app is first opened, players are greeted with a screen with a background of food ingredients and a play symbol in the centre of the screen. In the top left hand corner is a “For Parents” section where users can read about the privacy policy of the app and subscribe to the weekly newsletter. Within this section, the app gives instructions for how to turn off the in-app volume and setting the app to vegetarian mode, where no meat is displayed within the app. In the bottom right hand corner of the app is an advertisement for all of the other apps created by the same developers.

When the play button is pressed, players are taken to a picture of two different “monsters” and prompted to select one of them. Having done so, players are taken to a messy looking kitchen area, where they are presented on the left with a shelf of ingredients. Players can drag these either directly to the middle of the screen, or to the right, where ingredients can be prepared via various methods such as chopping, cooking, and blending. Once this is cooked, players can serve it to the monster and it will either make sounds of enjoyment or displeasure.

No in-app purchasing found during this review.

Ads for other apps by the developer appear within this app.

This app has the option to be switched into “Vegetarian mode”. This means that no meat items will be shown within the kitchen section of the app