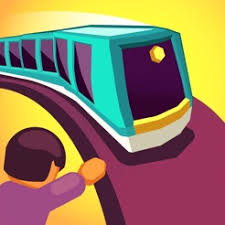 Train Taxi is a strategy puzzle game requiring basic motor skills to guide the train around different courses to collect passengers. Content cautions are advised for in-app purchasing and excessive product placement and advertising. Not suitable under 12, parental guidance to 13.

This review of Train Taxi was completed by the Australian Council on Children and the Media (ACCM) on 10 October 2019.

This review of Train Taxi contains the following information:

Train Taxi is a strategy puzzle game, requiring moderate motor skills to guide the train across the tracks and pick up all its passengers. Players are to collect all the passengers to complete and move on to the next level. As levels increase, so do the number of passengers that need to be collected. The more passengers collected, the longer the train gets and players need to be careful not to crash into the tail of the train whilst guiding it around the tracks. If players crash into the train’s tail, the level will restart. Completing levels successfully wins gold coins. In some levels, keys activate a treasure chest involving 9 chests where players randomly pick one to open and can unlock new trains and extra gold coins.

The levels in Train Taxi are fun and exciting, each new track has different surroundings and extra people to collect. However, the frequent advertising and product placement is distracting. After each level is completed, an advertisement for a similar game by the same developer pops up giving a demonstration of said game, for around 40 seconds. These advertisements cannot be exited; however, they can be clicked on which will take players to the App Store to make further downloads and purchases. Some of the advertisements can be inappropriate, including implied sexual references and inappropriate content. Parents should also be aware of the in-app purchasing, which can be made to get better trains and more gold. Purchases can also be made to reduce the level of advertising during the game.

There is some gender stereotyping in this App. For example:

There are some sexual references in this App. For example: