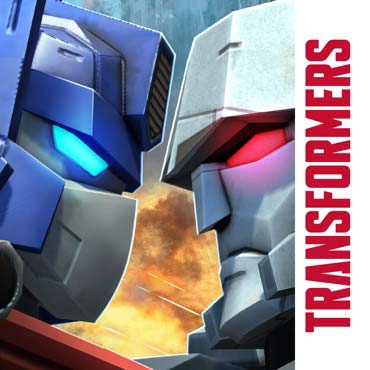 This review of Transformers: Earth Wars was completed by the Australian Council on Children and the Media (ACCM) on 14 May 2016.

This review of Transformers: Earth Wars contains the following information:

The level to which the game was reviewed was level 9.

The object of this game is to follow the instructions of the Transformers in order to find a way for Optimus Prime to reach Earth. Players are required to read on screen instructions and click the screen in prompted areas to progress to the next stages of the game. As the game continues, players are required to complete missions and battles to progress.

Players are required to log into their Game Centre account to play. The aim of this game is for the player to “find a way to get Optimus Prime to Earth”. The game is set at the Transformer’s base and the player is required to continue clicking on the screen in order for more information, tasks and missions to load. Prompts appear on the screen in the shape of a yellow arrow helping the player to know what to do next.

As new missions and tasks load for the user, they are prompted to have Transformers fight by shooting one another with their weapons and destroying other machines. To unlock the new missions and continue to the next stages, the player must unlock other Autobot machines in order for their team to win. Once the Autobots have been collected, they are sent to battle with the machines they wish to compete with. The player must strategically place the Autobots on the battle field for the Autobot to destroy its targets. Whether the Autobots win or lose they will gain points which will help them progress to the next level.

Over the period of the game, more characters are introduced to instruct the player how to continue, for example, Melody is shown speaking to the Transformers with some information and encouragement to continue playing.

The game connects to Game Centre while playing on an Apple product.  These platforms are online communities where you can share your scores and connect to your Facebook page. However, you can choose to restrict what is shared via Game Centre on your device.

No simulated gambling content was found during the review of this app.

Advert promoting Target appears in the corner of the page to tell the user that Transformers will soon be available there to purchase. Also, this app is part of the Transformers franchise.

Parents may become concerned with elements of this game as there is a high level of violence when the Transformers fight each other with guns and explosive devices. As the aim of this game is to shoot down enemy machines and players are rewarded for doing so it might teach them that violence is acceptable and should be rewarded.

The main aim of this game is to destroy enemy machines with the use of guns and explosives which indicates that a high level of violence is involved. The player is somewhat removed from the violence as they are watching machines fight from above and there is no blood involved in the battle. However, due to the sound effects and the battlefield setting, the user is exposed to a high degree of violence.