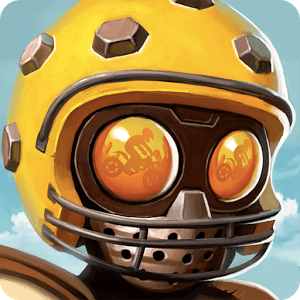 This review of Trials Frontier was completed by the Australian Council on Children and the Media (ACCM) on 14 August 2014.

This review of Trials Frontier contains the following information:

Trials Frontier is a racing game involving motorcycles and a range of challenging routes. The objective is to play through individual courses, race other characters and upgrade a player’s bike as much as possible. There are several skills involved including hand-eye coordination, basic motor skills and time-based reflexes.

When the app opens, players are thrown straight into the action – they are presented with a screen containing a character on a motorbike. The background seems to be lit by fire. Players are shown that they need to tap one of two arrows in the righthand corner of the screen (there are arrows facing backward and forward). Within this app, players must hold the forward arrow continually in order to move the character on a bike forward at full speed. If they remove their finger, the bike will slow down. There are two additional arrows on the left hand side of the screen, which players may use to tilt the bike forwards or backwards – this is particularly useful when players are mid-air and will likely crash if they land in a particular position. It also assists in performing front and backflips. Players have the option to pause also, and after several runs, will be forced to crash into some falling rocks.

After this point, they are taken to a different screen with a female character named Cybil who informs them that they’ve just woken up finally and are lucky to have survived the crash. Players then discover that their bike has been destroyed but there’s an old bike called the Armadillo that may still be used. Players are then sent on a quest to discover if it is there and during the quest, they receive 20 experience points and 10 coins.

Within this quest, there is a timer that records how long players take to finish the run – they are on a bike and must attempt not to crash as they move through the course. After completing it, they will receive a bronze, silver or gold medal depending on their performance. Players are then challenged in other quests to do tricks on their bike, such as backflips. This earns them additional rewards as they continue through the levels. Driving through specific points, such as Checkpoints, will cause ‘coin explosions’ and further earn players more rewards.

There are various areas to explore within the game, each of which have different bike routes to play through – these include the Cave Entrance, Three Bridges, Home Village, Pike Alley and Market Street. Players also have the option of playing against in-game characters in bike races. In order to win these races, however, it is necessary to upgrade the bike that players use. Each individual component may be upgraded (e.g. the handlebars, wheels, seat, etc). It costs gold coins to upgrade, and players can elect to use gems in order to speed up the time and skip past the waiting period.

The game encourages spending money by incorporating very significant time lags to upgrade their bike. Some actions will take between minutes and hours to complete, but players can skip the wait by using money to purchase in-game gems.

No gambling content found during the review of this game.

The game encourages spending money by incorporating very significant time lags to upgrade the bike. Some actions will take between minutes and hours to complete, but players can skip the wait by using money to purchase in-game gems. This may promote a culture of impatience and reckless spending amongst younger players.