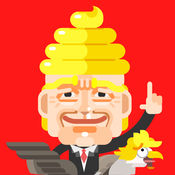 In this game, players use President Trump to attack protesters (and other enemies relevant to Trump) with his hair. Gross motor skills and good timing required to play. Caution: not suitable for children under 13 due to inappropriate ads and themes and social media connectivity.

This review of Trump Hair Matters was completed by the Australian Council on Children and the Media (ACCM) on 30 July 2017.

This review of Trump Hair Matters contains the following information:

Trump Hair Matters appears to be a gimmicky “send up” game aimed at providing opportunities for humour. Players control President Trump who rides upon a pigeon. The aim of the game is to drop Trump’s hair (which is shaped like poo – and makes a flatulent sound when dropped) onto protesters and enemies of Trump (such as Obama and the media) before they reach the other side of the screen below. Successful hits earn players points – which are called “Trumplets” – which can be used to unlock further enemies of Trump. Players control Trump by moving their finger left and right and then releasing their finger to drop his hair. Enemies below move at different speeds and are randomly orientated closer or further away on the road below. Therefore, simple gross motor and good timing required to play.

This game is quite one dimensional and doesn’t feature any real progress beyond levelling up and aiming for high scores. It’s clear that the game’s focus is that of humour, with Trump’s hair shaped like a pile of poo and the background picture features piles of yellow poo over prominent American landmarks – such as the statue of liberty. Having said this, there is much room for people being offended by this game (you can even drop a hair poo on Obama). Furthermore, the ads connected to this game (both constant banner ads and videos that you can watch to earn more Trumplets) feature violent game apps – some of which feature first person shooting. As result of this, together with the Facebook and Twitter icons that sit right of screen, this game is not suitable for children under 13.

There are permanent banner ads and icons which lead the player out of the app. The ads regularly feature war and shooting games.

Some of the enemies that can be unlocked are specifically named “Woman” and “Girl”, with the prominent male enemy named: “Protester”. Labelling males in this way may give the impression that their stance against Trump is somewhat justified – whereas woman and girls, that have no such label may be viewed as enemies simply due to their gender.

There is some crude humour and mild profanity.

None of concern beyond the symbolism of attacking people with poo.