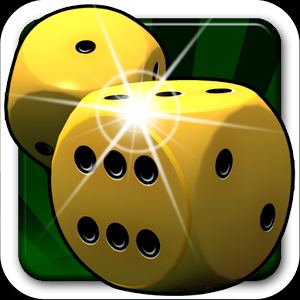 This review of Ultimate Dice was completed by the Australian Council on Children and the Media (ACCM) on 6 November 2014.

This review of Ultimate Dice contains the following information:

This game does not contain levels. It was reviewed in its entirety

Ultimate Dice is a simple app that allows players to roll between one and six large dice. The app does not appear to have a central objective. Players merely manipulate and control the movement of their electronic device in order to roll the dice and obtain different patterns and numbers. The skills required to play are motor skills and visual/spatial skills.

When the app is first installed and opened, players are taken to a full screen interactive display containing six moveable dice – as the device is manipulated and moved, the six dice shake and roll around the screen (the base of which appears to be a green felt pool table). The individual die will continue to shake slightly when the device is not held exactly flat. Dice will sometimes be resting up on an angle and players will need to manipulate their device physically in order to have them lie flat. The dice all have six sides like regular dice and players can attempt to obtain different numbers on them by repeatedly rolling the dice. However, the app does not offer any reward or punishment for obtaining different patterns and numbers – the game appears to be a free-form dice rolling game with no objective built into the app.

There is a small menu button in the bottom right-hand corner of the screen. This option brings up a pop-up option to adjust the number of dice that users can play with. The range goes from 1 die, to the maximum of 6 dice. The app would potentially be of use to individuals who require dice as part of an external game. The app contains realistic dice noises, and the dice themselves have a realistic appearance and style of movement.

There are also banner advertisements that appear in a continuous fashion and cannot be removed entirely. They include ads for other applications (e.g. ads for gaming, dating or debt control apps).

There are banner advertisements that appear in a continuous fashion and cannot be removed entirely. They include ads for other applications (e.g. ads for gaming, dating or debt control apps).

no game playing behaviour which may be of concern to parents was discovered during the review.