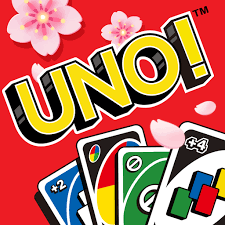 Uno! is based on the well-known number cards game. Strategic thinking and some arithmetic skills required. Not suitable under 13; parental guidance to 15 (in-app purchases, gambling style side games and video advertising).

This review of Uno! was completed by the Australian Council on Children and the Media (ACCM) on 18 May 2020.

This review of Uno! contains the following information:

The game was played for over 20 hours, however, the reviewer did not enter the ‘Uno Contest’, ‘Fun Room’ or ‘Uno World Cup’ portals. The reviewer reached level 27.

Uno! is an online version of the familiar family card game, with all the traditional number cards and some entertaining features only made possible by being digital. Each hand lasts 3 minutes making it fast and fun. Players mostly play with randomly selected players from around the world though after playing for a while, friends can be made and registered so that they can be selected to play in future games. The aim of the game is to lose all of your cards or get the lowest card score by the end of the three minutes.

There are a number of versions of the game that can be played including playing as a single or in partnership with another player. In Classic mode the player may pick up ‘skip’, ‘reverse’, ‘2+’ or ‘4+’ cards whilst in Go Wild mode there is an additional card called the ‘Discard All’ card which allows the player to discard all cards of a colour in one turn. Also in this mode if a ‘2+’ or ‘4+’ card is played, succeeding players can keep adding further plus cards until the one who can’t, collects the grand total. There are options to create friend groups in the Room mode and Party mode (which requires the app to know your location and requires a passcode) allows the player to play with people who are playing nearby. There is an Uno Contest mode which includes Uno Cup, Grand Prix and Ranked Mode. There are purchases required to participate in these modes and they have not been tested by the reviewer.

The final mode is Uno Universe and is a story mode of the game. This is, with supervision, the most suitable mode for younger players of this game. It follows a simple story line between hands of the game. The player requires ‘Energy’ of up to 5 levels to be able to play and when the energy runs out – generally after three losses – a time to rebuild the energy is required (around 50 minutes). ‘Energy’ can also be bought as an in-app purchase.

Uno! is a bright, up-beat app with pleasing graphics, fun interactive play and fast paced game play. As it requires an internet connection and pits the player against other players from around the world, this is a game that requires parental supervision for children of most ages. It can be signed in through Facebook, Twitter, and Instagram which, it should be noted, makes it easy for the player to automatically provide personal data and credit card information if the device administrator is registered to any of these sites. The player can select their own avatar or photo and player nick name.

During game play the player can use a bank of pre-set comments and emojis to communicate to the other players or even throw eggs at them or presents. Through a microphone feature it is possible to record short notes for the other players as well.

Parents should be aware that when changing modes or games video advertising will pop up and cannot be successfully circumvented until the allotted time has been reached. There is also an option to watch video adverts to earn ‘coins’.

There are Daily rewards and Events that are presented on the Home page, as well as a Store and Bank, some of which direct the player to in-app purchases by means of red notification style flags on their icons.

Parents should be aware of the greater community connectivity available in the ‘Fun Room’ mode (see App Description).

All of the additional modes require a payment of game currency to play. If the player has insufficient coin or diamonds they must wait until they are eligible for the free 300 coins that they can claim (when their stash is below 300) twice in a 24 hour period. As mentioned, in Uno Universe the player needs ‘Energy’ rather than coin. (see App Description) Despite the in-app purchases the reviewer managed to play quite successfully without making any purchases, largely due to the daily top up feature.

There are some gambling elements in this game, for example:

The gambling elements are not highly overt as they appear to be simple game options, however, given that in-game ‘coin’ can be won or lost by the choices the player makes based on the game odds, this is exactly like gambling without real money transactions.

Though the reviewer mostly saw ads for other games such as Fishdom, Yahtzee, and Word Collect, some of the games clearly involved gambling or potential gambling eg. Slotomania and Solitare Cube.