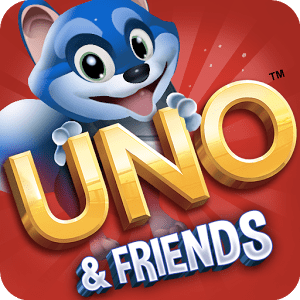 This review of UNO & Friends was completed by the Australian Council on Children and the Media (ACCM) on 18 April 2015.

This review of UNO & Friends contains the following information:

UNO & Friends is an app based on the famous card game of the same name. The objective of the game is to play rounds of the card game UNO, by matching a card placed on the table with a card of a similar colour or number. The game involves collecting coins and tokens through playing more rounds of UNO. This game requires motor skills and strategy.

When the app is opened, players are met with a bright red pop-up screen that asks them to enter their age. There is an accompanying message that states ‘While this game is free to play, some game items may be purchased with real money. You can control in-app purchases from the settings menu of the play store app’. Players are then asked to sign in via a Google+ account in order to progress and play the game.

After this, players are taken to a complicated central screen containing lots of buttons and features. A young blonde woman offers helpful hints in a small speech bubble, stating things such as ‘Tokens are used to play games of Uno. Whether it’s a quick game, a tournament or a game with your friends, tokens can be won from tournaments and purchased with real money’. There are multiple icons along the bottom of the screen that additionally state ‘Add a friend and get 2 tokens!’

Players can access a personal profile, which offers them statistics such as their current level, win/loss ratio, number of tournament wins, current/best win streak. Within this area, players can also see achievement goals they can strive to meet, such as ‘Change the colour to green five times with a wild card’.

During the Uno gameplay, players are told that they must be the first to play all the cards in their hand in order to win – players are dealt six cards to begin with. The game involves several other in-game characters that play also and players must put down a card that matches the existing card on the table in terms of its number or colour. There are also wild cards that, once they are placed down, offer players the chance to allocate what the colour of the next card must be. It is also possible to challenge in-game characters so that they draw four cards instead of players themselves needing to draw cards (this can happen in instances where players believe the in-game character could have played a matching colour card instead of a wild card). Players are also informed that they should tap the Uno icon when they are down to their last two cards and to challenge other characters who do not call Uno. At the end of a game, players are shown a screen which tells them if they placed, 1st, 2nd, etc, and offers them information on what level they are. Players can also buy boosts to assist them in their games of UNO – this usually involves obtaining a companion animal. When players have a companion, they come with special features such as ‘When you play a red numbered card, a random opponent draws a card’.

The game also includes a tournament area – tournaments are 16-player match-ups, with 3 rounds consisting of 4 players each. Rounds are two minutes long and the 1st and 2nd placing players advance to the next round. At the end of a tournament, the winner unlocks a ranked crown and wins a pile of tokens.

The game further contains Daily Rewards, where players must open the app each day consecutively in order to reap a range of rewards (usually in the form of coins). Coins are used to get boosts and personalise a player’s experience – they are rewarded for playing games but can also be purchased with real-life currency.

Yes: The app has a Scratches feature where players can choose one of three cards to scratch and potentially receive an in-game financial reward (the monetary amount attached to each card is revealed when the surface is scratched off). After doing this, the app advertises the in-app purchase of buying packages of scratches – for example, a packet of six premium scratches for $4.99, or a packet of six regular scratches for $2.49.

Players have the option of gaming with their friends who also have the game. It additionally offers players the option of giving and receiving special ‘gifts’ from friends. The app also contains a link to an online discussion forum for the app within the Settings menu – players can go here to communicate with other individuals in relation to the game.

This game has a Scratches feature which players have the potential to win in game rewards. Scratches can also be purchased with real money.

The app contains advertisements that appear randomly throughout game – these are full-screen video advertisements that last approximately 30 seconds and cannot be closed until they have finished (e.g. advertising other children’s gaming apps such as Dragon Mania Legends and the match-3 game Pastry Paradise).

This game has elements that could easily become highly addictive, in regards to continual resource generation, the provision and attainment of frequent small rewards and the requirement that the game is checked often in order to maximise output.