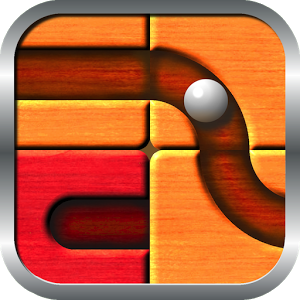 This review of Unroll Me was completed by the Australian Council on Children and the Media (ACCM) on 6 April 2014.

This review of Unroll Me contains the following information:

Unroll Me is a timed puzzle game. The player must move tiles around the board to make a pipe which connects the beginning tile to the end tile. The player must complete the puzzle before the time runs out and the ball begins to roll!

The player begins with a 4x4 grid with 14 tiles and each tile contains a different part of a pipe. There are two spaces free on the grid, which allows the player to move the tiles around and connect the pieces of the tube together. On the grid there is also a silver beginning tile, where the ball starts and a red end tile, where the ball must finish. When the game starts the player has seven seconds to connect the pipe before the ball starts slowly rolling. If the ball hits a blocked tile before it reaches the end, the ball smashes and the game will be over.

At each level you can score three stars. These stars are based on how many moves it takes you to solve the puzzle. The fewer moves it takes the more stars you receive. As the levels progress the player has less time before the ball starts rolling and the puzzles also become harder to solve.

Yes: You can pay to unlock extra packs of levels. The medium level pack is $0.99 and the hard and extreme level packs are $1.99.  However, you can unlock these packs for free by getting three stars on each of the previous levels. The app also offers you the option of removing the advertisements but this costs $1.99.

Occasionally this app features full page advertisements for other app games such as ‘The Happy Frog Game” or “Game of War”. There is also a bar at the bottom of the screen which displays similar advertisements. There is an option on the home screen to remove advertisements from the app, however this will cost .

No game playing behavious which may be of concern to parents was found during the review.