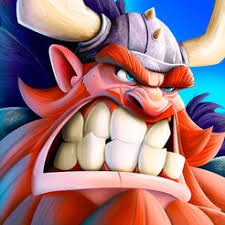 This review of Vikings: Empire War was completed by the Australian Council on Children and the Media (ACCM) on 31 January 2019.

This review of Vikings: Empire War contains the following information:

Our Reviewer completed up to level 45 of the game.

Vikings: Empire War is a very basic fighting game. Players use a group of three heroes to fight against the enemy (usually skeleton looking characters). The three heroes are: The Warrior (using a shield and sword; The Mage (using magic) and; The Priest (a female character also using magic). Game play takes place in platform style – usually in a darkened forest. Attack is achieved by simply tapping or swiping anywhere on the field. Coins, Gems and Soul Stones are rewarded through successful game play. These can then be used to upgrade Landmarks; buy boosters, chests and resurrections of heroes; and upgrading equipment, respectfully. The aim of the game is to conquer all areas by defeating all of the big bosses.

Vikings: Empire War has several areas of concern for parents to consider. Most importantly, the repetition of movement that is required.  There is no variation of attack here, players simply tap or swipe to fight. As there is little break between waves of enemies, children could be continually tapping at the screen for long periods of time, and parents should be vigilant in promoting sufficient breaks in play. The game also rewards players for watching ads. Most of these that were encountered were ads for other similar games. There is also in-app purchasing, with the highest bundle being $159.99. On a more positive note, there is no actual contact of weapons or blood splatter. There is also no social media connectivity and no gambling themes.

There is some In-App Purchasing in this game. For example:

There is advertising in this game. For example: