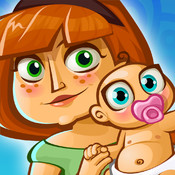 This is a building game in which the player creates a village. Caution: in-app purchases, online interactivity, advertising, gambling device

This review of Village Life was completed by the Australian Council on Children and the Media (ACCM) on 27 February 2014.

This review of Village Life contains the following information:

This is a building game in which the player creates a village.

The game begins with a couple in the forest who are about to have a baby and must find shelter. The game shows players what they need to do. Before long, they have twins, which are discreetly born inside a hut. The player starts with an allocation of 50 gems and must complete tasks to create a village, such as building housing and collecting water and food. Villagers’ thought bubbles indicate their needs. On completion of the tasks the player may receive a reward – happiness, coins or gems. Villagers use up energy to complete tasks – when they run out, they can replenish energy by spending gems to buy potion, or they can wait, as energy is topped up over time.  Players also collect happiness from the villagers – it is the accumulation of happiness which increases the player’s level. On moving up a level, the player can spin the Wheel of Fortune and will receive a number of gems (generally between 5 and 40). They can have another spin for 8 gems – on the second spin the number of gems which can be won is reduced. Potions (which is how babies are made) and some other provisions can be bought with gems. Players can visit the villages of friends who they have invited to play. As the game progresses, villagers grow up, start dating and marry other villagers. Villagers also grow older – a sufficient level of play was not able to be reached by the reviewer to determine whether they just keep getting older or whether they die (which might be upsetting to some players if that were to occur).

Some tasks are very slow to complete (from seconds through to days) and can be sped up with gems. A number of the tasks are not able to be completed without either using gems or asking friends for help.

Players can purchase gems for $0.99 to $42.99. Special deals for gems and other useful items are frequently offered, for a limited time. Purchasing in Facebook games can be by debit card, credit card and Paypal. Players can redeem Facebook gift cards. There is also the option to charge smaller purchases to a mobile phone account, however a significant fee is added when using this method. The mobile phone purchase transaction screen states “Customers under age 18 must have account holder's permission”. A text message is sent to the mobile number entered to confirm payment.  Parents should be aware that if they enter credit card details, the player can make more than one purchase. On making a credit card purchase, players are advised that “Facebook will save your payment information for future purchases. You can always remove or manage this information in your account settings.”

When the player plays this game through Facebook, the app receives their basic information, email address and it can post to Facebook on the player’s behalf. It is possible for players to edit who can see the posts. Players can visit the villages of their friends. Some activities require asking friends for help, otherwise the player must spend gems.

When the player moves up a level, they get a free spin on a Wheel of Fortune. The prize is a number of gems. The player is able to spin again for 8 gems.

Some of the video advertising presented as an option to earn extra gems was not appropriate for children. Ads included one which referred to “PE” (premature ejaculation) and increasing sexual satisfaction. Another ad was a trailer for a movie, rated MA in Australia, which was about an HIV positive man who was importing unapproved medication into the US for himself and other HIV positive people. One of the video ads included brief images of gambling and fighting.

Parents should be aware that games played in Facebook, depending on the device, may have a panel at one side of the screen which has several sponsored links, effectively ads. These could be for products (e.g. posters), other games (which may include war games) and religious messages.

Another way to earn free gems is to view and complete one of numerous “offers” – these include downloading and playing other apps (which include war and casino simulation games), doing opinion surveys and purchasing items like jewellery, flowers and PC software

For villagers to have babies, “baby potion” can be purchased with 200 gems – it provides “100% guaranteed pregnancy” and the player must “Select a couple to invigorate” (only married couples are offered for selection). Spending more gems can choose the baby’s gender and even more gems can buy twins.

Use of substances: To replenish energy and have a baby, players drink “potion”.

Extra Gems can be earned by watching video content, some of which is inappropriate for children. (See Advertising and product placement)