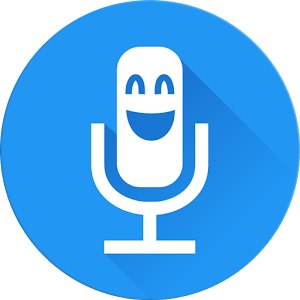 Voice Changer With Effects is an app that alters voice recordings.

This review of Voice Changer With Effects was completed by the Australian Council on Children and the Media (ACCM) on 28 November 2015.

This review of Voice Changer With Effects contains the following information:

This app was reviewed through all features.

Voice Changer With Effects is an app designed to allow voice recordings to be altered digitally. There is no central objective, but the app allows users to record dialogue of their choosing, and select voice distortions which they can then save as ringtones or share with friends. The skills required include motor skills.

When the app is first opened, players are taken to a simple blue screen with a microphone icon in the centre and a statement exclaiming ‘Tap to start recording’. There is an icon in the top right-hand corner that contains the settings ‘Create voice from text’ and ‘Import pre-recorded sound’. There is also a left-hand button which enables players to access a larger menu, with a wide range of options: ‘Saved Recordings’ (a place to store recordings), ‘Remove Ads’ (it is possible to make an in-app purchase of $3.99 to remove all of the advertisements within the app), ‘Recommend this app to a friend’ (allows players to ‘share’ the app via social media platforms), ‘Settings’, ‘Contact Support’ (done via email) and ‘About’.

After players tap to record a snippet of dialogue, they can click the same icon to stop it. They are then provided with a list of options to distort the sound of the voice clip. The list contains 30+ options of voice changer effects, all of which can be trialled. These include options such as Cyborg (sounds very mechanical), Dizzy (very drawn-out and slow), Squirrel (sped-up and very high pitched), etc. Each of these can be saved, set as a ringtone, set as a notification sound, or shared via Facebook.

The app also contains a midi keyboard, which allows players to take the original recording and play it at different pitches. These can also be recorded.

It is possible to make an in-app purchase of $3.99 to remove all of the advertisements within the app.

Players are able to recommend the app to friends, by sharing the name of the app and a small amount of pre-written information via social media platforms such as Facebook, Gmail, etc. They can also share individual saved recordings with friends via Facebook.

The app contains banner advertisements that are situated along the bottom of the screen. These contain static advertisement images for various apps, companies and websites: ‘Google Photos on Android’, which promotes a ‘fast way to find photos’; ‘Concrete Cutting Sydney, Professional, Competitive, Friendly’; ‘Phone is infected? Scan and kill the virus now!’; ‘Online payments for Australian Businesses’; ‘Free Audible Audiobook: Be seduced by Fifty Shades of Grey’, etc. Players are also shown full-screen visual advertisements for gaming apps such as Blossum Blast Saga – a video is shown promoting the app, and players must either click on the small X in the top corner to close the ad manually or click on the large ‘Install’ bottom.