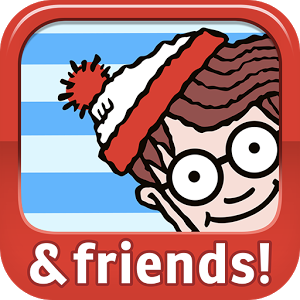 Waldo and Friends is a search and find locator game based on the classic "Where's Waldo (Wally)" books. Caution: In app purchases, advertising and interactivity

This review of Waldo and Friends was completed by the Australian Council on Children and the Media (ACCM) on 12 April 2015.

This review of Waldo and Friends contains the following information:

This review was completed after 1.5 hours of gameplay.

Waldo and Friends is an app based on the famous find-and-seek books. The objective of the game is to play through various screens and locate Waldo (as well as his friends and other designated items) in a complex animated image. Skills required to play involve mostly visual and search-based skills.

When the app is opened and installed, players are asked to sign in via a Google+ account. They are then asked to accept the privacy policy and terms of use by clicking on a ‘Confirm’ icon. Once the game itself begins, players are met by an animated old man who states ‘Whirling winds! That was quite a terrible twister! Hurry, Explorer! It’s up to you to find Waldo!’ Players are shown how to locate Waldo amongst a screen of complex animations. The image presented contains objects that move slightly and depicts people, fruits, leaves, rivers and paths, etc – these are all in a range of colours. Players must tap on Waldo in order to select and find him.

Players are subsequently asked to locate three other images – a milk carton, a man in a green suit, and three men standing together. If players take too long to find any of these, a large swirling yellow circle highlights their location in an effort to assist players. After a player taps on an item/person, a small tick appears over them and their image at the bottom of the screen disappears – only the items that have yet to be found remain. After players find all three items, a large ‘You Win!’ sign appears on the screen. Players are then given a total score and a number of stars out of four. They gain stats on their items found, as well as chain bonuses and time bonuses.

Players are then met by Waldo at the end of their first level. He states that players are an ‘expert explorer’ and explains that ‘interesting items found on your journey can be traded for coins!’. These coins allow players to travel to new locations. The game also contains timer-and-quest features, where players can speed up the process of accessing different locations and islands by using in-game gems. In order to gain more coins, players select items they wish to find, and then must search for that item within an animated scene to unlock the subsequent items. Players also have an aid to help them find items, called ‘Woof’s Bone’ – it will instantly find the item players are seeking. Players have ten of these. If a player taps too many times across the screen (in order to find an item without actually browsing and properly locating it), the screen will pause for a few seconds and they will be delayed. The length of time that players take to find their objects is shown in the top left-hand corner of the screen.

Waldo also explains that a player’s Key meter fills up after every search they complete – once players have two keys, they will be able to play the treasure chest bonus round. This involves selecting from one of three treasure chests to open – each chest offers players a different reward, such as more experience points, the ability to unlock a new zone to explore, etc. There are also levels that involve the majority of the screen being dark and players must move around a window of light in order to search the entire area for items they require.

Players are encouraged to complete missions – this involves finding particular items and receiving in-game rewards (such as gems) as a result. Gems can be used to get Bones, Keys and Energy. For example, 400 gems can purchase 1000 Energy Points for players. Players can purchase gems as an in-app purchase within the store for real-life currency.

Players are able to invite friends to play the game also. In order to offer an incentive for this, players are informed that they will receive a free Energy Refill if they connect to Facebook.