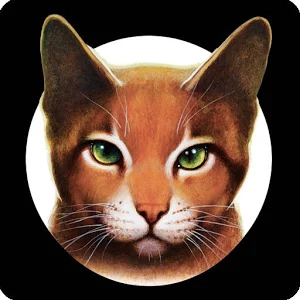 Warriors is an offical reference guide to the book series of the same name.

This review of Warriors was completed by the Australian Council on Children and the Media (ACCM) on 19 September 2015.

This review of Warriors contains the following information:

This app was reviewed to completion

Warriors is an official reference guide centering on the novels produced by Erin Hunter. There is no objective within the app, as it merely provides information on the novels and its characters, as well as features such as a trivia game about the storyline and content. There are limited skills needed, but motor skills are useful, in addition to memory for the trivia feature.

When the app is opened, players are shown a small video animation of two cats behaving quite aggressively towards each other, snarling and baring their teeth. After this, a central menu screen is shown. This is broken into categories: The Books, Cats and Clans (Bonus Material), Timeline (Spoiler Alert), Start Reading (Warriors #1), Exclusives (new from Erin Hunter) and a Trivia Game.

The Books category displays all of the books written by Erin Hunter within the Warriors series. Players are able to click on any of the book covers, read a small blurb about the novel, as well as purchase the print edition from places such as www.amazon.com. Clicking on these options takes users away from the app and to other online websites.

Within the Cats and Clans category, it is possible to read facts about the many cats within the book series. Information is divided by cat, and includes things such as Mother, Father, Mate, Kits, Defining Moment (e.g. ‘See Fireheart receive his nine lives and take the name Firestar in Warriors #6’), Exclusive Trivia (e.g. ‘Firestar’s mother was a brown-and-white tabby called Nutmeg’) and a list of books where that particular cat is featured. There is similar information for the five individual Clans, with the app providing information on their Hunting Territory, Camp, Unique Battle Skill, and Exclusive Trivia. The app also contains information on the particular roles each member of a clan fulfils, such as where they sleep, what they do, and what it is like to occupy that particular position. The ‘Warrior Code’ is also described and the 15 principles are laid out clearly.  For example, principles include quotes such as ‘The word of the Clan leader is the warrior code’ and ‘A warrior rejects the soft life of a kittypet’. There is a glossary of terms used within the novels, as well as large in-depth maps of the territories described within the books. It is possible to zoom within these maps.

The Timeline feature provides a complete timeline of the storyline and charactes in chronological order. Small and significant events are listed in brief sentence descriptions for users to follow.

The Start Reading option enables players to begin reading the first book, Warriors #1. The first 5 chapters are available via the app but the rest of the novel must be bought. However, there are three additional short stories, as well as a ‘Welcome video by Erin Hunter’ for users to access.

The Trivia Feature is an interactive component that allows users to select from one of the three book series’ and to answer trivia-based questions regarding the novel content. For instance, one question asks ‘Which Clan goes missing halfway through Into The Wild?’ with four answers being presented. Players are given 1 minute to answer as many questions as they can. If they select the correct answers, they gain a point and can progress to a new question. If they choose wrongly, they do not receive a point but a new question is given regardless.

The app also contains some information on Erin Hunter – the collective name for four individuals who produce the Warrior novels.

No gambling content found at the time of this review.

No game playing behaviour which may be of concern to parents was found during this reveiw.