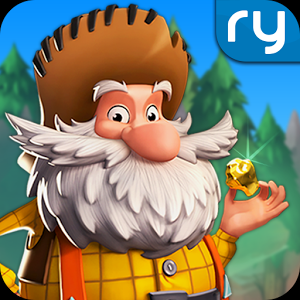 This review of Westbound: Gold Rush was completed by the Australian Council on Children and the Media (ACCM) on 25 August 2015.

This review of Westbound: Gold Rush contains the following information:

this review focuses on levels: 1-10

Westbound is a timer and quest app based around the storyline of gold-digging in a mining town. The objective of the game is to complete quests and missions to earn more money, thus unlocking more buildings and features to use. There are limited skills needed but an understanding of strategy and problem solving may be useful.

When the app is opened, players are taken to a start menu – it encourages players to ‘Explore the abandoned mines, unearth desperado treasures and find a booming town’. Upon clicking Start, players are met by a male character, Carson, who asks to be lent a hand as his leg has become stuck under a wheel. Players are then taken to a top-down timer-and-quest style view of an area and must tap on Carson’s character icon in order to release him. As a result, players are able to gain silver coins as a reward. Players are then able to chat briefly with Carson, who states that he has come to the valley with ‘gold fever’.

The game then directs players to tap on the nearby Valley Walls in order to explore them – this causes Carson to begin visibly digging in the valley and players are asked to wait several seconds for this to happen. A young woman named Ruby Maeis is found amidst the valley rubble. Players attempt to help her by giving her some food to eat – this is done by tapping on an area of crops to harvest them. Players again receive a reward of silver coins and a gold star, which furthers their experience level. Ruby is looking for her niece and although players state that they will help her in her journey, it is suggested that the group set up camp first. To do this, players must tap on a Wagon Tent icon and wait for the build to process.

As the game progresses, players have the option of choosing a number of builds/features from the Catalogue store within the game to make their valley more functional. These include items from categories such as Houses, Buildings, Crops, Resources, Décor and Helpers. Each of these items cost silver coins to purchase and assistm in giving players experience and more in-game coins/resources. Players are able to use purple tonics in order to speed up the processing time of builds, in a timer-and-quest style manner.

The game also contains missions, such as ‘Explore the valley to find Ruby’s niece’, ‘Free the stranger’, etc which help players gain additional rewards upon completion. Players are also able to gradually go up a level within the game and thus unlock more items to use within their valley.

At level 6, players unlock Team Challenges where they are encouraged to join the RockYou community to play with others online. The app also contains a section which states that a log-in via Facebook will be coming soon. Players are further told that they can gain extra rewards (e.g. gold bars) if they sign in via a Google+ account.

Players are able to ‘earn free tonics!’ by watching advertisements for other apps, as well as downloading and playing through other apps. Some of these include downloading and completing Brightwood Adventures and completing level two (earns 1020 tonics), download and run Clash of Lords 2 (for 365 tonics), download and run World Tour Casino (for 173 tonics, contains gambling content), etc.

The extensive in-app purchasing and time-lag features may encourage the spending of real-life money.