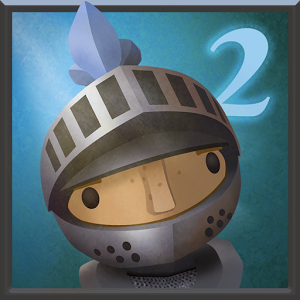 This review of Wind-Up Knight 2 was completed by the Australian Council on Children and the Media (ACCM) on 22 April 2014.

This review of Wind-Up Knight 2 contains the following information:

Wind-Up Knight 2 is a platform game that encourages individuals to play through levels in order to collect coins, earn higher ranks and unlock more difficult levels. Each level has the central objective to complete, which is to reach the end. However, there are also mini quests within each level that players can tackle. The skills needed include fast reaction time skills, motor skills and hand-eye coordination.

Upon installation, the game immediately asks players to connect via a Google+ account and then states that it requires an email account to play. It then takes players to a menu, with options to select ‘Tournament’, ‘Options’, ‘Achievements’ and ‘Store’.

The player begins in the Training Grounds. Here, they move along a course that involves jumping over obstacles, collecting coins and using their sword to kill enemies that appear along the path (usually very large birds). It is possible to unlock achievements by collecting enough coins. Players must learn to roll and jump, double jump, and complete a range of behaviours to survive the levels – collecting diamonds, avoiding enemies, etc. Each level increases in difficulty as players progress through the game. The knight runs automatically and it is possible to pass through checkpoints which will bring you back to a recent position if a player dies (by falling off a ledge, being hit by an obstacle or being attacked by a monster bird). There are gameplay tools that appear to change based on the level and include things such as Bouncy Pads which lift players into the air, Ice Blocks which speed up a player’s movement, etc.

There is also the Tournament component of the game, the rules of which include attack bags to collect as many gems as possible. Bags are placed in the air or on the ground and need to be hit with a sword in order to unlock the rewards inside. Players may also compete on the leaderboard and earn exclusive armour. If players quit the tournament without completing it, they receive a message that states that they ‘Consistently failed to meet expectations’ and did not complete the task'. Messages also appear telling players about the Daily Tourmanent, where you can ‘test your skills against your friends in a collection of traps rotated daily’. They cost 1 ticket per play.

Within the Achievements section of the menu, players can unlock trophies for particular activities. This involves things such as ‘Buy an extra helmet, armour, shield and sword’, ‘Find 5 of the gnomes hats’, ‘Defeat 500 enemies’, etc.

Within the Store, players can purchase in-game currency in the form of coins/money in order to obtain gear. This gear includes helmets (e.g. the Hard Helm, priced at 5,500 coins), shields (e.g. the Yellowjacket Armour, which is locked and only attainable once players reach a certain level), shields (e.g. the Gem Shield, priced at 25,000 coins) and weaponry. Each item is associated with a specific skill or in-game use. In regards to the purchasing of in-game currency, the store options range from purchasing 5,000 coins for $1.99, to 150,000 coins for $32.99. Within the store, there are also ‘Free Offers’ which involve players earning 100 free coins by ‘liking’ the game’s Facebook page, or following the Twitter page for the app. Players may earn additional free coins by downloading and either running or reaching a certain level within a whole range of games (between 100 and 1925 coins can be obtained for individual apps).

Tickets form a type of in-game currency, as they can only be obtained through purchasing them with coins. Tickets are needed to participate in the Tournaments and if a player does not have the coins or the tickets to play, they must spend in-app money to do so.

It is also possible to unlock the full game for a price of $9.99. However, it is advertised to the player for 30 minutes after initial installation that they may receive a 55% discount and purchase the full game for $4.49. The full game provides additional levels to unlock, 1000 extra coins and unlocks the Yellowjacket Armour set.

There is only advertising in regards to in-app purchases related to the game itself – no advertisements for external apps or products. The advertisement encourages players to purchase the full game for a monetary cost.