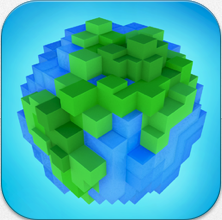 This review of World of Cubes was completed by the Australian Council on Children and the Media (ACCM) on 5 April 2014.

This review of World of Cubes contains the following information:

This is a creative game in a randomly generated three-dimensional environment. The player places and removes blocks to build structures. There are no explicit objectives in this game as it is open ended and allows players to create whatever they wish to within the world.  The game requires limited skills but helps to encourage creativity.

World of Cubes is a three-dimensional creative game where players move about in a randomly generated three-dimensional world, placing and removing blocks to create structures of their own design. Younger users should avoid the online multiplayer component which includes a chat room. This is moderated, however, players can construct potentially inappropriate/offensive creations or destroy the creations of other players. As a result, younger users may find this disturbing or upsetting. This game features full-screen advertisements that require manual player action to close them. However, all of the advertisements fall within the 6+ Rating. Players typically construct houses, buildings and vehicles. The blocks required to construct these can be accessed and equipped from a building menu.

Players can communicate with other individuals through multiplayer maps and the chat system. Although this is moderated, it may potentially be unsafe for younger players.

Advertisements appear randomly within the game's menus and require player action to close them.