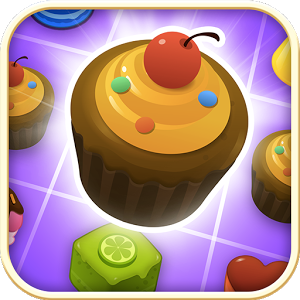 This review of Yummy Mania was completed by the Australian Council on Children and the Media (ACCM) on 25 August 2014.

This review of Yummy Mania contains the following information:

Yummy Mania is a match three puzzle game where players slide images of items across the screen in an effort to match three or more of the same kind and create cascading combinations of items. The objective is to play through the multiple levels of increasing difficulty, learning new combinations and matching more items where possible. The skills required to play are spatial/visual, lateral thinking and problem solving.

The app opens on a brightly coloured home page with the options to play via connecting to an individual’s Facebook account or to play via the Guest Login.

Players begin with a target that they must reach by pairing items such as: milks, puddings, love cakes, etc.  They are told that they need to put the love cake vertically in a column to make a match. This entails swiping across a grid of pictures to make three images in a row match up. After completing enough matches, a player will complete the level and be given a score to represent how well they did. They are also shown a list of potential bonuses they may purchase for the next level – these are bought using the in-game currency of blue gems. These gems are used to buy moves, lives (it is possible to refill their lives to maximum capacity by using 14 gems), etc. Gems also enable players to purchase fruit within the game in packages such as: 600 strawberries for 10 gems, 1590 strawberries for 25 gems, 3300 strawberries for 50 gems, 6900 strawberries for 100 gems, 21600 strawberries for 300 gems or 37500 strawberries for 500 gems – this encourages players to make in-app purchases for real-life money.

If players get stuck during game play and are unsure of what move to make, the game prompts them by having the small icons jump and move slightly where it is possible to form a line of three. If players exceed their target, they obtain a higher score, more rewards (which take the form of strawberries) and earn more gold stars. If players run out of available moves before obtaining the target number of three-in-a-row images, they can either choose to buy more moves with blue gems or need to repeat the level. As players progress through the levels, they are offered item rewards that have practical uses – for instance, players may be given a shovel that removes a single object. This may give players an advantage when a level is particularly challenging. Another example is a Gingerbread Man, a reward item that will remove all the resources across one line. When a player is doing well, they will be encouraged by a voiceover in a child’s voice that states things such as “Awesome!” or “Perfect!”

The app does not appear to pose any overt risks to children and, aside from risks associated with in-app purchase, it may provide a fun way of practising spatial/visual, basic geometric and problem solving skills.

Yes: The in-app purchasing component of the game takes the form of blue gems or crystals. These can be purchased in a range of packages, including 37 gems for $4.99, 77 gems for 9.99, 242 gems for $29.99, 420 gems for $49.99 and 875 gems for $99.99. There is an icon on the home page that offers a ‘First Purchase Reward’ in order to make spending money more appealing to players. The advertisement states that players may purchase any amount of gems and receive 120 gems for free with their first purchase.

During play, the app has a small pop-up that encourages players to ‘connect to Facebook to play with your friends!’ and offers them 20 blue gems if they do so. Players are also encouraged at the end of each level to share their scores via Facebook. Additionally, players have a message inbox where they may send and receive messages from other players they connect with.

No gambling content was found during the review of this app.

There are full-screen advertisements that appear in between levels occasionally and these must be manually closed. These ads are for other apps, as well as external products and services (such as CompareQuotes – a service that deals with providing laptops). Spending real-life money to make in-app purchases ensures that all advertising will be removed from the app.

There was no game playing behaviour which may be of concern to parents found during the review of this app.