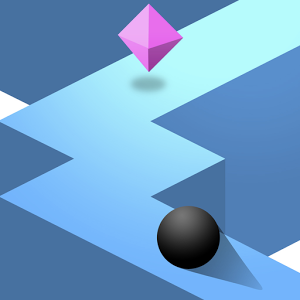 This review of Zigzag was completed by the Australian Council on Children and the Media (ACCM) on 8 March 2015.

This review of Zigzag contains the following information:

This app was played for approximately one hour.

Zigzag is a reflex-based puzzle game that encourages players to work through levels of increasing difficulty. The objective of the game is to tap the screen and redirect a ball left and right, as it navigates through a zigzagged path. The skills required to play include quick reflexes and highly efficient motor skills.

As soon as the app is opened, a full-screen pop-up advertisement appears for players. The ad must be manually closed and advertises another gaming app by the same creators, called ‘Spring Ninja’. The app then informs players that they must sign in via a Google+ account in order to play the game.

The game is played by tapping the screen in order to navigate a small black ball across a zigzag-style maze. When players tap anywhere on the screen, it changes the direction of the ball from moving diagonally left, to diagonally right. There are small purple diamond crystals that may be picked up along the way and the goal of the game is to progress as far as possible before falling off the ledges of the path.

Once a player reaches 50 points, the gameboard changes colour to signify an unlocked achievement. The path changes with each play-through, thus keeping individuals more engaged with the game. Each time players lose, they are given a score for that attempt, as well as the number they received for their best score. Players also have a ‘share’ option where they may elect to share their score with friends across various social networking websites.

As players gain more purple diamonds, they unlock other features of the game. For instance, once a player obtains 100 diamonds across all of their play-throughs, they unlock a white ball instead of the existing black ball. There are many different coloured balls to unlock.

The game contains a Leaderboard feature where players may view their best scores and share them with friends. It also contains an Achievements section, which lists a range of possible achievements (i.e. ‘Get a score of 50 points!’, or ‘Play 1000 rounds of Zigzag!’).

Yes: In order to remove ads within the app, players may make an in-app purchase of $2.96. There is an icon to do this on the main page of the app.

There is a Leaderboard feature within the app, where players can view their score and share this with their friends over social media websites.

In addition to the app opening with an advertisement, similar full-screen pop-up ads appear frequently at the end of levels. These include ads for apps such as Clash of Clans (with violent content), Audible for Android, Candy Crush Soda Saga, and Empire Z (also violent content). In order to remove the ads from the game, an in-app purchase of $2.96 must be made. There is also a banner add that remains down the bottom of the game (e.g. advertising ‘HostPlus’, ‘LVS: Be Nurtured’, ‘Clash of Clans’, etc).

No game playing behaviour which may be of concern to parents was discovered during this review.