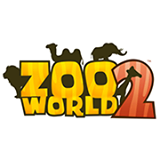 This is a building game in which the player creates a zoo. Caution: in-app purchases, online interactivity, advertising.

This review of Zoo World 2 was completed by the Australian Council on Children and the Media (ACCM) on 27 February 2014.

This review of Zoo World 2 contains the following information:

This is a building game in which the player creates a zoo.

The player begins with a zoo and an allocation of zoo bucks, critter credits and energy.  A tutorial shows the player how to set up their zoo, add terrains and buildings, breed animals and more. Tasks are assigned – on completion the player receives rewards. Zoo bucks can be used to purchase terrains and buildings, animals and decorations. Animals produce hearts, with different types of animals producing them at different rates. When the animals are fed  the player receives zoo bucks, stars and food. Energy is required and is used to feed animals, set up or upgrade buildings and collect money earned in kiosks. The player receives one energy credit every 5 minutes. It can also be won as a reward for achieving some tasks and earned by visiting friends daily. Energy can be bought with critter credits (and also with food, if the player has a sufficient amount). Critter credits can be used to speed up some game activities, like breeding, and also to purchase more energy and some items. Critter credits are harder to obtain, being awarded when the player moves up levels or purchases them. Completing most tasks also earns stars, which accumulate to help move the player to the next level, when they receive a number of rewards. There are many levels to progress through, each adding new animals and items which can be purchased or accessed. Once the player has a number of animals in their zoo, it becomes quite challenging to keep up with the energy requirements of the animals and the kiosks etc.

Players can visit other zoos. Some of the zoos are those of fictitious game characters, while others are the islands of friends.

It is possible for players to view information about the animals, such as their preferred habitat. Awareness is raised regarding endangered species, as well as the role of zoos. Players can help to save a species to earn critter credits.

Players can purchase zoo bucks and critter credits for US$0.99 to US$100. Periodically specials are offered, for a limited time. Purchasing in Facebook games can be by debit card, credit card, Paypal and Facebook gift card. There is also the option to charge smaller purchases to a mobile phone account, however a significant fee is added when using this method. The mobile phone purchase transaction screen states “Customers under age 18 must have account holder's permission”. A text message is sent to the mobile number entered to confirm payment.  Parents should be aware that if they enter credit card details, the player can make more than one purchase. On making a credit card purchase, players are advised that “Facebook will save your payment information for future purchases. You can always remove or manage this information in your account settings.”

When the player plays this game through Facebook, the app receives their basic information (including name, gender, profile picture, user ID, friend list and other public information), their birthday and current city, email address. It can post to Facebook on the player’s behalf. If players invite 3 friends, they receive extra energy and supplies.  Players can visit the zoos of their friends.

None found in the levels played.

To earn an opportunity to play a game in which useful prizes can be won, the player can watch a video – the video is an ad. Ads shown included a kitchen renovation company and a pain relieving medicine. Parents should be aware that games played in Facebook, depending on the device, may have a panel at one side of the screen which has several sponsored links, effectively ads. These could be for products (e.g. posters), other games (which may include war games) and religious messages.

The main male cartoon style character is shown as strong and well muscled. One of the ads which appeared at the side of the screen was for a “Sexy MMORPG” (Massively Multiplayer Online Role Playing Game). It contained a cartoon style drawing of a voluptuous woman in a skimpy outfit.

Players are encouraged to breed animals. They must have 2 adult animals of the same type who are well fed. They must be standing right next to each other – when they do so, hearts appear. The player clicks on an animal and selects the option Breed – a number of game hearts are used, depending on the type of animal. They select a place for the baby to be located and the stork delivers a bundle. A period of time (which varies according to the animal) must elapse before the baby is ready to emerge from the bundle.

To earn an opportunity to play a game in which useful prizes can be won, the player can watch a video- the video is an ad, refer to advertising and product placement section.