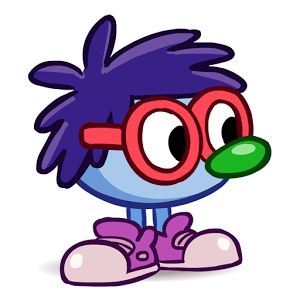 This privacy check of Zoombinis was received from AppCensus on 2 June 2021.

This review of Zoombinis was completed by the Australian Council on Children and the Media (ACCM) on 30 March 2016.

This review of Zoombinis contains the following information:

Zoombinis is a problem-solving app involving puzzles. The central objective is to work through the levels of increasing difficulty and ensure that each of your zoombini characters makes it across whatever obstacle they are trying to pass. The skills involved include motor skills, decision-making, problem solving, as well as abilities to see patterns and analyse data.

When the app is first installed, players are shown an animated video that describes the story of the Zoombinis. Players discover that they are a friendly species who live happily together making small and useful products. They have a sense of fulfilment and inner peace and ‘healthy bank accounts’. When the Zoombinis were joined by another species known as the Blots, things began to change. They went into business together, but the Blots began to take all of their profits, ruining the Zoombinis happy life. As a result, the Zoombinis attempted to escape and build a new home on another island.

After this brief clip, players are asked to enter a name into the game. Once this is done, they are shown a screen of a small area near the sea. Players are informed that they must create a crew of 16 Zoombinis to man the nearby ship in order to escape and that each crew member must have unique traits. The game offers options to design the Zoombinis from a range of stencils – for example, there are multiple hair designs, as well as different pairs of eyes, various mouths, etc. Once players finish this, they watch as the Zoombinis begin to board the ship.

Players are then told that after several days in a storm, the Zoombinis reached the shore of a peculiar land. The first challenge contains a bridge that players must ensure their Zoombinis cross safely. They are instructed to ‘look for clues and don’t be afraid to make mistakes’. There are two bridges and one is blocked by a magical gust of wind. When players escort all of their creatures across safely, they can move onto the next challenge/room. Players also have the option of skipping challenges by tapping a small Play icon in the bottom righthand corner. It is optimal for players to get all of their Zoombinis through to the next level, otherwise, if players finish a level early, they will only be able to take the Zoombinis that they successfully helped across the last challenge room.

For another challenge, players must choose from 5 options of pizza toppings and make a pizza that is approved of by a character standing in their way of advancing. Players can choose as many or as few pizza toppings as they like and receive feedback with each attempt. The character will say ‘Something on there I don’t like’, or ‘Needs more than this’. Through a process of elimination and problem solving, players must solve the riddle of what toppings are required.

There is a section of the app containing achievements for players to unlock and work through. Players can also select one of four difficulty settings to play, for each of the 12 levels within the app. The violence shown within the app is very mild – it involves animated violence with the Zoombinis, when a player fails to successfully move one of them across. They often fall flat on their face, fall off cliffs, etc. No crude humour was witnessed within the scope of this review and the voice-over narration appears suitable for most ages.

NO. None found during this review.