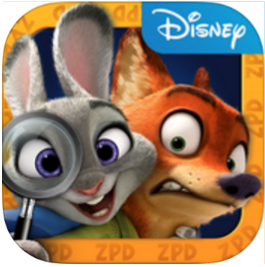 This review of Zootopia Crime Files: Hidden Object was completed by the Australian Council on Children and the Media (ACCM) on 12 June 2016.

This app was reviewed for approx. 90 minutes.

Zootopia Crime Files – Hidden Object is a timer and quest investigation app based on the popular children’s movie. The objective is to solve a variety of cases within the fictional world. The skills required are problem solving, critical analysis, and motor skills.

When the app is first opened, the player is shown a screen asking them to enter their age. The app informs the player that this app contains in-app purchases and advertising messages. The ability to prevent in-app purchases can be disabled in the device settings.

The app opens with the player being shown a meeting between animated animal police officers. The player is given a task to find a golden acorn in a train station. The app then opens to a green screen, where the player is asked to get ready to investigate. The player is shown an image of a crime scene and can tap various items to pick them up. Once the items on a screen are all collected, players are given a final score based on the speed with which they located them and are given a reward.

Once an investigation is complete, players can take items to a lab and talk to other characters to try and solve the case. As the player investigates, various suspects are ruled out and the player is taken through the process of accusing the perpetrator. Once the case is solved, the player is rewarded with a medal and a new case is unlocked.

Activities such as analysis, interrogation and investigation sometimes come with a timer element. This can be sped up through the use of in-game bucks.

The player has finite gauges of energy, bucks and tokens within the game. With these, players can initiate investigations, visit crime scenes and analyse evidence. Once these gauges are empty, players can either wait for them to refill over time or can purchase tokens and energy using in game bucks.