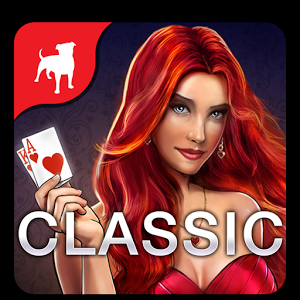 This review of Zynga Poker Classic TX Holdem was completed by the Australian Council on Children and the Media (ACCM) on 25 February 2015.

This app was played for approximately 1 hour

Zynga Poker TX Holdem is a casino/gambling game that focuses on poker. The objective is to sit at tables and use the features of poker such as folding, raising and calling in order to win more chips. The skills required to play are motor skills and luck.

When the app is opened, players are brought to a screen displaying an attractive redheaded woman wearing a red silk dress. She appears to be wearing heavy make-up and has quite large breasts and displayed cleavage. Players are informed that they may log in via Facebook or play as a guest. The phrase ‘Connecting to your poker buddies, stirring drinks’ appears whilst the game loads.

As the gameplay begins, players are shown that they start with $5,000 in chips. They are asked to join the table. After clicking ‘Play now’, players are positioned at a table with three other players. Two cards are given to each player, although only the two allocated to the individual playing the app can be viewed. After this, players are given approximately 30 seconds to decide if they wish to fold, call the amount the last player put down in terms of chips or raise. If a player elects to fold, they then must watch the hand play out without participating. Four other cards are put down on the table for all of the players to use in making their own hand (e.g. using two of their own cards, as well as the other four central cards on the table).

Players can click on another player’s icon and either ‘send a gift’ or ‘add as buddy’. If a player stops playing to look at other features of the game, they are removed from the table and a ‘sit’ option appears for when they are ready.

Players are able to play games of ‘Texas Hold’em’, where they may set an amount for stakes as well as the min/max buy-in, number of players and speed at which they must play.

Players also have the option of playing through a ‘Sit-n-Go Tournament’, or they may play other games such as ‘Hi-Lo’ or ‘1-on-1 Poker’. Hi-Lo is a game that involves making a guess as to whether the card that is concealed is higher or lower in value than the card that is displayed. 1-on-1 Poker is a heads-up poker, where players can either connect and play with their friends or another random player.

There is a ‘Chat’ function where players can write to other individuals also playing the app. This appears to be unmoderated.

It is possible to earn ‘Free Chips’ within the game by viewing advertisements for other apps, by downloading and installing other apps or by signing up for a free trial for some programs. Some of these apps include Aldi, Castle Clash, Game of War (which contains violent content and themes), OzLotteries, etc.

When the app is opened, players are brought to a screen displaying an attractive redheaded woman wearing a red silk dress. She appears to be wearing heavy make-up and has quite large breasts and displayed cleavage.

The game involves considerable simulated gambling in the form of poker and card games, as well as slot machines. This would be highly inappropriate for younger players.