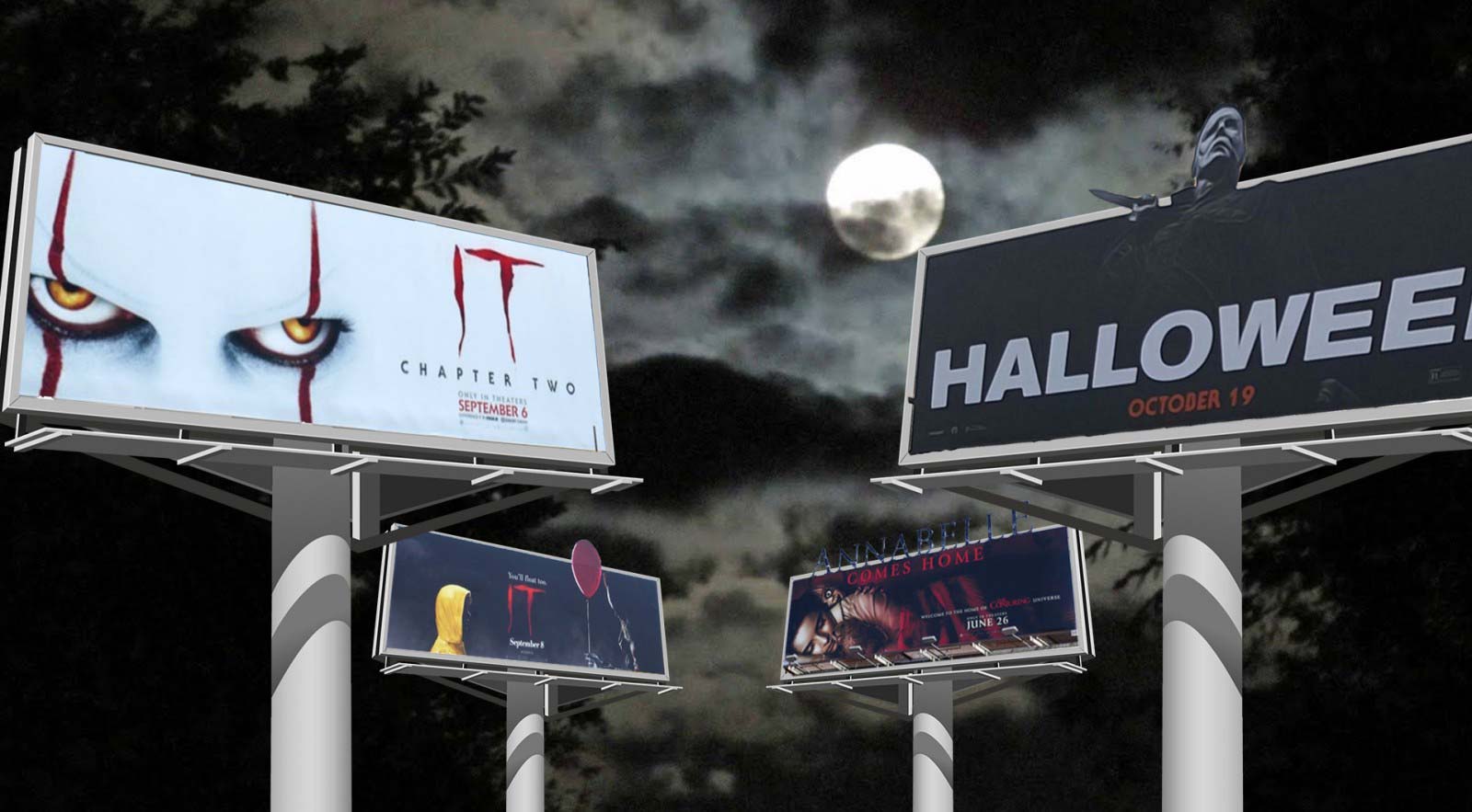 Horror movies are being promoted in public spaces such as main road billboards, bus shelters, on the sides of public transport, boundary screens at sporting events, and via trailers on free-to-air TV.

The scary images used are causing children much distress, and can cause ongoing harm. Their parents are rightly complaining that they cannot protect their children from such images, and sometimes the ongoing issues for their children are difficult and expensive to try to rectify.

Child psychologists tell us that the distress is real, and so are the consequences. See more on this below.

CMA has campaigned about these images for many years. See “Stop ambushing parents with unsuitable trailers” https://childrenandmedia.org.au/taking-action/current-campaigns/stop-ambushing-parents-with-unsuitable-trailers

It’s time the industry changed its behaviour to protect children who are in public spaces, where they have every right to be.

Over the past few years, many parents have lodged complaints with the Advertising Standards Bureau, about the images used to promote horror movies such as Halloween, It, Pet Sematary, Us, and Annabelle Comes Home.  In many cases these complaints have not been upheld as they haven’t breached the Australian Association of National Advertiser’s (AANA) Code of Ethics.  Two defects in the Code have contributed to this: firstly, para 2.3 appears to act as a let-out for violent images used to promote violent films, and secondly, there is no code which deals with scary images. (The AANA Code for advertising and marketing communications directed to children which does have such a prohibition does not apply to such advertising).

Advertisements on billboards and in bus shelters for horror movie It: Chapter two have caused a new public outcry in 2019.

What needs to happen

The AANA needs to be persuaded to change some of the provisions in its Code of Ethics.

For example, para 2.3 which says that

should not be used to excuse the use of violent images to promote violent movies.

And it’s time to insert a prohibition against advertising in public spaces, that uses “images or events in a way that is unduly frightening or distressing to Children” (which appears under the heading of “Social values”, in para 2.6 of the Code for advertising and marketing communication to children.) And drop the very subjective “unduly” while we’re at it.

What should also happen, is that FreeTV Australia’s ClearAds division should revise its classification processes for TV trailers (advertising) for violent and horror movies.

What was the outcome?

The AANA released its revised Code of Ethics on September 20 with a start date of February 21. This Code does little to fix the issues. It left the key paragraph 2.3 (Advertising or Marketing Communication shall not present or portray violence unless it is justiflable in the context of the product or service advertised.) unchanged and failed to add a paragraph that effectively dealt with advertisements that were scary but not necessarily violent.

What you can do

Dr Lesley-Anne Ey has this to say about ads for It: Chapter two

“The impacts of exposing young children to such promotions are not trivial. Ongoing issues from exposure to scary images can include continuous nightmares, bed-wetting and fatigue due to lack of or interrupted sleep, which can interrupt children’s education and daily life.

Scary images such as the It poster are more likely than not, going to give many children nightmares, particularly young children.

When children are exposed to an image that does not fit within their schemes of what they know, in this case what a clown should look like, they tend to look more closely to try to make sense of the image. They then absorb more detail and the image becomes entrenched in their minds.

If you are familiar with the concept that ‘once you see something, you can’t un-see it’, it is not difficult to understand why children who have been distressed by this image will continue picturing the image in their head and of course, they are more vulnerable to picturing this image at bed time when they are not distracted by other things, leading to a fear of going to bed, a fear of not wanting to be alone and nightmares.

Research demonstrates that children from the age of 6 years old can retain images equivalent to the retention of college students. If children have been unfortunate enough to see the trailer, that contains very scary and gruesome images they are likely to play back the trailer in their mind.

Children can develop  ‘Coulrophobia’ [fear of clowns] , which can have life-long impacts. Such images should not be in public places where children can see them.”