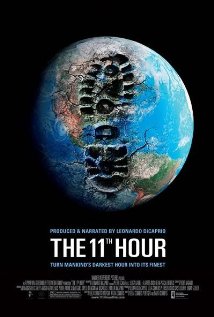 Not recommended under 10, PG to 15 (Disturbing scenes and themes)

Narrated by Leonardo DiCaprio, The 11th Hour is a persuasive and informative documentary that discusses the damaging impact of humankind on the planet. The film presents the views of over fifty of the world’s leading scientists and environmental activists including David Suzuki, Stephen Hawking and Wangari Maathai. The opening stages of the film depict weather related disasters and the devastation they wreak upon human populations and the environment.
The film shows how initially sunlight was human’s sole source of energy and how humans relied upon sunlight to grow crops, produce clothing and provide warmth. The sun provided an energy source that allowed humans to live in balance with nature and the environment. The film then discusses the way in which the discovery and exploitation of fossil fuels have contributed to the poisoning of the atmosphere, global warming and planetary imbalance.
The final portion of the film is devoted to a discussion of how humans can work to avoid their own extinction.

The film contains some violence to animals, including:

The film includes images of ecological disasters, people in peril, and harm to animals which children may find disturbing including:

Some children in this age group may also be disturbed by the above-mentioned scenes and themes.

The 11th Hour is a thought-provoking documentary that explores the reasons for the world’s current state of environmental crisis. The film has minimal narration by Leonardo DiCaprio, but relies mainly on discussion by world-acclaimed scientists and environmental activists. Due to the themes discussed in this film, children under the age of ten years may find the film uninteresting and beyond their ability to comprehend. The main messages from this movie are: