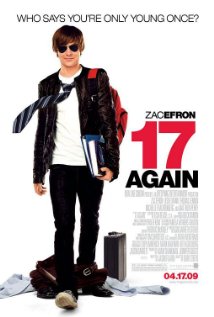 Mike O’Donnell (Matthew Perry) has spent the last 20 years of his life wishing for what could have been. At 17 years of age Mike was a budding basketball star on the cusp of landing himself a college basketball scholarship when his girlfriend, Scarlett (Allison Miller), broke the news that she was pregnant.  Mike easily made the decision to choose true love over his career but as he grows older he starts to questions the choices he made.
A freaky twist gives Mike the chance to live it over again and experience the path not chosen when he is transformed back to his 17 year old self (Zac Efron). With the help of his best friend Ned (Thomas Lennon), the high-school nerd turned billionaire, Mike seeks to get back the life he thought he had lost. Along the way Mike realises that he hasn’t been sent back to his past so that he can re-live it, but so that he can re-evaluate what really matters, save his marriage with his wife Scarlett (Leslie Mann) and help his daughter Maggie (Michelle Trachtenberg) whose boyfriend Stan (Hunter Parrish) is pressuring her to have sex with him, and his son Alex (Sterling Knight) who is being bullied.

Apart from the scenes described above, it is unlikely that this film will scare or disturb children under five.

Apart from the scenes described above, it is unlikely that this film will scare or disturb children under eight.

There are a few scenes of physical and emotional bullying and fighting that may upset children of this age.

Some children in this age group could also be upset by the bullying and fighting shown.

There is a high level of sexual innuendo and sexual references throughout the movie, including:

Whilst the concept of 17 Again is not new, the movie is quite enjoyable, with charismatic characters and feel-good storylines that are likely to please tween audiences in particular.
Values in this movie that parents may wish to reinforce with their children include:

This movie could also give parents the opportunity to discuss with their children attitudes and behaviours, and their real-life consequences, such as;
bullying