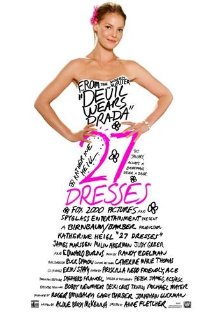 Lacks interest under 8, PG to 12 (Sexual references and coarse language)

Jane Nichols (Katherine Heigl) is an attractive young woman with a seemingly incurable fascination with weddings.  Jane has personally arranged the weddings of twenty-seven friends and relatives, acting as bridesmaid on each occasion.  Jane is also an avid reader of newspaper journalist ‘Malcolm’ Doyle’s (James Marsden) wedding column, and has a collection of many of his articles.

Unfortunately, Jane appears unable to engineer her own romantic attachments, largely due to the long-standing infatuation she has had with her boss George (Edward Burns).  Entirely unaware of this situation, George begins dating Jane’s younger sister, Tess (Malin Akerman).  The obvious difficulty Jane faces with their relationship is magnified by the fact that Tess has purposely misrepresented herself to George as an outdoorsy, vegetarian animal lover (all traits that George finds appealing).

Meanwhile, Jane unwittingly meets her favourite writer ‘Malcolm’ Doyle, who introduces himself as Kevin Doyle (his real name).  Kevin becomes interested in writing an article about Jane and her wardrobe of expensive bridesmaid dresses.  However, after completing the first draft of this article, he begins to fall in love with Jane and changes his mind about publishing the story.  Kevin’s hard-nosed editor (Melora Hardin)  decides to print the article anyway, which deeply hurts Jane and leaves her feeling betrayed.

After a great deal of soul-searching, Jane realises that her feelings for George were never based in reality, and that, despite everything that has happened, it is Kevin that she loves.

27 Dresses is an enjoyable romantic comedy directed by Anne Fletcher.  This film is pitched at young females aged over the age of twelve, but may also be entertaining to older audiences.

The main message from this movie is that true love is not beyond anyone’s reach, although it may not look the way we imagine it should.