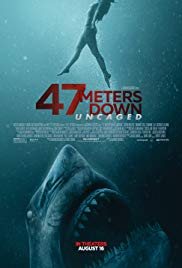 Not suitable for children under 13, parental guidance to 15 (sustained suspense, violence, themes)

Mia (Sophie Nelisse) is having a hard time adjusting to her new life in Mexico where her father (John Corbett) is leading a dive expedition, exploring ancient Mayan burial chambers lost in a vast underwater cave system beneath the city. Mia’s popular stepsister, Sasha (Corinne Foxx), isn’t helping matters by ignoring the bullying Mia endures at school and ignoring her at home. When the two are forced to spend the day together at a tourist attraction, Sasha’s friends Alexa (Brianne Tju) and Nicole (Sistine Stallone) offer an enticing alternative and Mia reluctantly agrees to join them. The girls find themselves in a deserted part of the jungle where they hike down to a beautiful waterhole that hides an entrance to the ancient caves. Using scuba gear left for archaeologists the girls decide to explore the first cave. Amazed at what they initially find Nicole ventures a little further, however, terrified at what she discovers, she accidentally knocks over a column which ultimately results in part of the cave collapsing. Trapped underwater in the darkness the girls must find a way to escape before their air runs out and before the numerous sharks that lurk in the caves find them.

Some of the above-mentioned scenes may also frighten or disturb children over the age of thirteen.

47 Metres Down: Uncaged is an underwater thriller and a sequel to the first 47 Metres Down, through with different characters and a different location. Although the plot is largely unbelievable and the dialogue is weak, viewers will likely feel the fear and tension as they wait for the next, inevitable, attack to come. The movie will most likely appeal to teen audiences.

The main message from this movie is to think before you act, especially when it involves a dangerous risk.