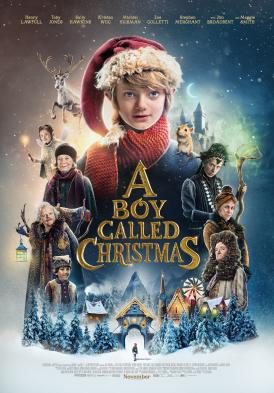 Not suitable under 5; parental guidance to 8 (sense of peril, threatened violence, sad themes)

A day before Christmas, three young children in London do not feel joyous as they are still grieving over their Mum’s death. To make things worse, their Dad has to work late and asks Aunt Ruth to look after them. Ruth (Maggie Smith) is an odd, elderly woman whom the children find a bit weird, but they know that their Mum liked Ruth, and as Ruth starts telling them a tale, they are soon fully absorbed in the story about a boy called Christmas. Through this story they follow young Nikolas (Henry Lawfull), who lives in a little cabin high up in the woods in Finland, with his father (Michiel Huisman), a poor woodcutter, after his mother was killed by a bear. When the King announces an award to the person who manages to bring back hope and magic to the poverty-ridden people, Nikolas’ father sets off North in the quest to find the mythical ‘Elfhelm’ that Nikolas’ mother used to talk about. After weeks of being in the care of his horribly mean aunt, Nikolas realises that the red pointed cap – made by his mother – contains a hidden map showing the way to Elfhelm. Together with his only friend, talking pet mouse Miika (Stephen Merchant), Nikolas sets off to find and support his father – and perhaps to find out why his mother had given him the nickname, “Christmas”, a word that so far had no meaning to him.

A Boy Called Christmas is a live-action, family, fantasy, adventure movie based on Matt Haig’s 2015 novel of the same name. The movie is a reimagination of the story of Father Christmas who lives in the far North of Northern Europe and, with the help of elves and his reindeer Blitzen delivers toys to children all over the world. A fantastic cast, fanciful sets, stunning sceneries, a gripping story, a good portion of humour, and plenty of positive role models and messages make this movie a great choice for a family Christmas movie. Parents need to be aware that this movie tells a story about the origin of Christmas alternative to the Christian story of origin, i.e. Christmas as an important religious celebration the remembrance of Jesus Christ. That being said, parents can still use the movie to reiterate core Christian values and themes such as kindness, forgiveness, honesty, and self-sacrifice. The recurring topic of parental death should be considered as potentially upsetting or triggering. However, the movie has a very constructive approach to this difficult subject, and could also be inspiring and bring a sense of hope to children who have experienced loss, for example by acknowledging and validating the incredible pain, but at the same time stressing that tragedy and loss are inevitable parts of life, and that it is still worth it and important to keep an open heart (“Grief is the price we pay for love.”). This and several scenes marked by a sense of peril and danger make the movie not suitable for a very young audience and warrant parental guidance for children aged 5 to 8.

This movie could also give parents the opportunity to discuss with their children the importance of forgiveness, and the dangers of hate, and projection: Elfhelm’s leader, Mother Something, has been holding on to her grudge and suspicion towards all humans. As a consequence, she has turned bitter, forbidden her subjects to live old traditions, and she cannot imagine that Nikolas could be different. Nikolas shows her that not all humans are the same, and that there is good in people.

Nikolas also leads by example by forgiving his nasty aunt who treated him so badly. Instead of seeking revenge and marvelling in her misery, he shows strength of character and gives her a special Christmas treat.

Furthermore, it is also nice to see how simple, modest and humble the Elves’ gifts are. Unfortunately, this is ruined by a gigantic mountain of presents that the London children find under their tree. Nevertheless, this could be a good opportunity to stress what Christmas should be about.