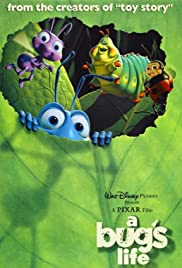 Not suitable under 4; parental guidance to 6 (animated violence, scary scenes)

Flik (voice of Dave Foley) is a unique ant who sees the world for all its possibilities, who can’t seem to follow the masses and who is forever searching for more productive ways to do things. When his latest invention accidentally knocks all of the food off their offering stone Hopper (voice of Kevin Spacey), leader of an evil band of grasshoppers, insists that the ants now give them double rations to make up for it even if it means that the ants themselves will starve. Flik, feeling terrible for what he has done and hoping to win the admiration of Princess Atta (voice of Julia Louis-Dreyfus), ventures off to Bug city where he is determined to find some ‘warrior’ bugs who will help rid his colony of the grasshoppers forever. Flik inadvertently comes across a rag tag crew of circus bugs who are down on their luck and eager to take a job. Due to misunderstandings, the circus crew arrive in the ant colony under the impression that they will put on a show but soon learn the ants are hoping that they will slaughter the grasshoppers instead. When the tiny Princess Dot (voice of Hayden Panetierre) is attacked by a bird, Flik and the reluctant group work together to save her, earning the adulation and applause they have all been craving. When Flik is banished and the circus crew forced to leave before the grasshoppers return, it is Dot who reminds them all of their capacity for greatness and the crew return to help Flik outsmart the tyrannical insects. Flik’s plans, once again, go awry but the ants soon learn that there is power in numbers and power in unity and that one ant, backed by thousands, can do the impossible.

Bullying, slavery, fear of taking risks and trying something new, pretending to be something you are not.

A Bug’s Life is an animated adventure that showcases excellent computer animated graphics and a unique view of the insect world. There are some important messages about standing up for what you believe in and the power of unity to overcome injustice. This is a family film that parents and children can enjoy together but due to some of the perilous and scary scenes it is not suitable for very young viewers.

The main messages from this movie are that everyone has a role to play and that no matter how small and insignificant you may feel, it is important to believe in yourself and to have faith in your ability to make a difference.