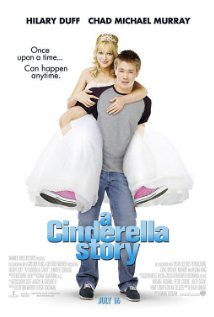 Sam is brought up in San Fernando by her widowed father Hal who owns a diner. They share a very close, loving relationship but her world is shattered when her father dies during an earthquake. Prior to his death he had married Fiona and brought her and her twin daughters Brianna and Gabriella, into their home. Fiona now takes over the running of the house and the diner relocating Sam to the attic and putting her to work scrubbing floors and waiting on tables in the diner. Sam has high hopes of attending Princeton College and tries hard to juggle work and school.

In high school Sam is mercilessly harassed as being the ‘diner girl’ however she has a good friend in Carter, a bit of a nerd, and gets good grades. She secretly admires Austin Ames, the good looking captain of the football team who is going out with Shelby, the ‘popular’ girl at school. Austin also wants to go to Princeton but his father has great ambitions for him to win a football scholarship to USC and carry on the family tradition. However unbeknown to Sam she shares an email relationship with Austin whom she knows as Nomad, and who appreciates poetry. They arrange to meet on the dance floor at the Halloween Ball, but of course on this night Fiona demands she works in the diner. With the help of her good friend ‘Fairy Godmother’ Rhonda, Sam arrives looking beautiful at the ball. Austin of course falls in love with her but she has to leave before midnight to rush back to the diner before becoming discovered.

Austin now has to find his beautiful princess and in the process has to decide what he really wants out of life – to be himself or do what his father wishes. Sam too learns to stand up for herself and uncovers a few surprises when she decides to move out of home.

There’s a bit of comic violence in this movie:

Children in this age group might be disturbed by the following:

Children over the age of eight are unlikely be disturbed by this movie.

Children over the age of thirteen are unlikely to be disturbed by this movie.

There is no nudity or sexual activity but plenty of skimpy clothing and girls in bikinis.

There is a small amount of coarse language, the occasional use of ‘butt’ and ‘oh my God’.

There are a few underlying messages such as reaching for your dreams, assertiveness and that parents shouldn’t try to live their lives through their children.