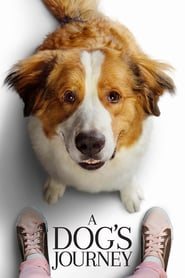 A Dog’s Journey is the sequel to the beloved 2017 film A Dog’s Purpose, both based on the bestselling books written by W. Bruce Cameron. The sequel is based on the many lives of Bailey the dog (voiced by Josh Gad), who is reincarnated again and again with the purpose of finding an owner to protect and love. The movie begins with Bailey living on a farm with his ‘boy’, Ethan (Dennis Quaid) and Ethan’s wife Hannah (Marg Helgenberger). When Hannah’s son tragically dies his widow Gloria (Betty Gilpin) and their little daughter Clarity June “CJ” (Emma Volk) come to stay with them. CJ loves life on the farm and Ethan and Hannah adore her. However, grieving the loss of her husband, Gloria struggles to care for CJ and her insecurities and selfishness cast a shadow over their lives. Feeling as though Hannah is trying to take CJ away from her, in a fit of anger and grief Gloria suddenly decides to move away with CJ. Ethan and Hannah are devastated. Bailey feels their pain and soon after, as Bailey lays dying, Ethan asks him to come back to find CJ and protect her at all costs. This begins Bailey’s adventure through multiple lives as ‘Molly’, ‘Big dog’ and ‘Max’ in order to love, help and protect CJ. ‘Molly’ helps a lonely, 11-year old CJ (Abby Ryder Fortson) cope with her alcoholic, neglectful mother. Many years later in New York City, ‘Max’ again finds CJ (Kathryn Prescott) in need of love and companionship and reunites her with her childhood best friend, Trent (Henry Lau). Together they experience joy and heartbreak, music, love and laughter and finally returning home.

Best suited to families with older children/teenagers, A Dog’s Journey is a feel-good, funny and emotional drama that tugs at the heartstrings. The movie touches on serious themes but also offers powerful messages about friendship and love.

The main messages from this movie are to learn to love without condition, that humans are always happier with companionship (be it human or canine), that we are not meant to go through this life alone and that we always end up where we are meant to be.