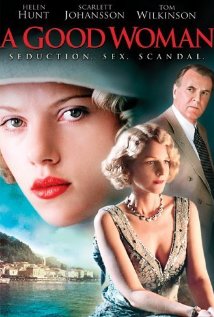 A Good Woman, set in the 1930s, tells the story of New Yorker Stella Erlynne (Helen Hunt), who is rumoured to have slept with, been involved with, or been the mistress of many of the city’s most prominent men. She leaves the States penniless, and arrives in Italy hoping to use an old personal connection to re-establish herself.

In Almalfi she meets Robert Windemere (Mark Umbers), an extremely rich American, newly married to the love of his life, Meg (Scarlett Johansson). Meg is a very pretty, sweet and innocent young wife completely devoted to her husband. Due to behaviour and circumstance it begins to look as though Robert and Stella are having an affair, and this notion is helped swiftly along by the prying eyes and gossiping mouths of Almalfi’s high society. Meanwhile Meg is doing her best to ward off the continuous advances made by Lord Darlington (Stephen Campbell Moore), a renowned playboy and one of Robert’s close friends.

Rumours abound and it looks as though marriages and lives will be torn apart until an unlikely friend helps Robert and Meg learn some very valuable lessons about idle gossip and true understanding.

The film contained only one instance of violence, when Robert punches Lord Darlington in the face. Fighting stops when Stella appears in the doorway.

There are many sexual references in this movie:

There are a couple of scenes, including:

Numerous characters are seen constantly smoking and drinking throughout the film. Also:

There is one instance of mild coarse language: “Take the damn thing.”

The movie’s main message is that there can often be logical explanations for what may appear to be illogical behaviour. If parents view this movie with older teenagers, they could point out the damage that can be done by spreading or listening to idle gossip.