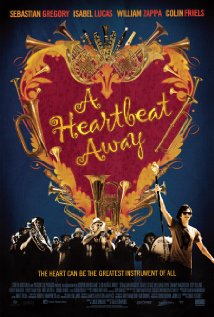 Not recommended under 8, PG to 13 due to violence, coarse language and lack of interest for younger viewers.

Kevin Flack (Sebastian Gregory) is an aspiring rock musician who is constantly at loggerheads with his father Edwin (William Zappa). Edwin is the director of a marching band which spectacularly lost an ‘at home’ competition twenty years earlier when a downpour caused the band to collapse into the mud. Edwin has never got over this public humiliation and has turned into a bitter and angry old man.  He is determined to win the next competition but his plans are seriously disrupted when he’s hit by a truck and finds himself laid up in hospital.

Kevin is somehow persuaded to take over from his Dad and organise the band for the coming event. An added motivation is the fact that developers are planning to take over the club’s meeting rooms and if the band fails, it’s certain doom.

A Heartbeat Away is a comedy with an unlikely, but nevertheless predictable, plot that might appeal to younger teens and some adults.

The main messages from this movie are to accept people for who they are despite the fact that they have different tastes from your own, and not to give up when times are hard.