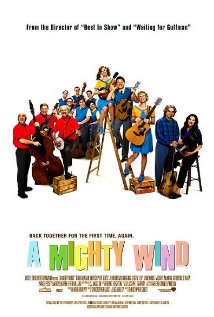 Irving Steinbloom, a one time manager of sixties’ folk groups, has just died and his son Jonathan is determined to preserve his memory. He wants to put on a tribute concert to his Dad and so gets in touch with three of the groups he used to manage: the Folksmen; the Main Street Singers; and Mitch and Mickey who were all very popular in their day. The members are now of course aging, but are all quite happy to reunite to do this concert.

There are some problems however. The Folksmen can’t agree on what songs they should sing; Mitch has spent some years in a psychiatric hospital after having a nervous breakdown and is now a very intense, reclusive person; the Main Street Singers have changed their name to the New Main Street Singers and are involved in ‘WINK’ (witches of nature’s colours).

All of this causes Jonathan Steinbloom, a compulsively organised person, quite a few headaches and leads to some very funny moments. However the night finally arrives and the ‘Ode to Irving’ goes off with a few hitches.

There is only one instance of comic violence when Jonathan is being overly pedantic about the flower arrangement in the entrance to the Town Hall and the compere bops him on the head.

There is nothing scary in this movie apart from possibly Mitch who looks very weird and might scare very young children.

Some children in the age group may also be scared by the above.

There are quite a few sexual references in this movie including:

Mitch is staying in a seedy motel room and twice while he is practising his music, a couple in the next room are obviously having sex: the bed has very noisy springs; the wall shakes and the picture moves; the woman makes loud moaning noises.

There is some drinking of alcohol and Mitch appears to be on drugs most of the time.

There is not a lot of coarse language; however, there are a couple of profanities: ‘Jesus’ and ‘Oh my God’ a few times.

There is really no take-home message in this movie. Values parents may wish to discourage include having to do whatever it takes to get to the top.