A Month of Sundays 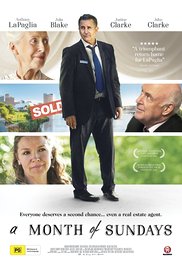 Not recommended under 8; parental guidance 8 to 12 due to coarse language and mature themes

Frank Mollard (Anthony LaPaglia) is a real estate agent who is struggling to move on with his life after his divorce from Wendy (Justine Clarke) and the death of his mother. It takes a call from a woman called Sarah (Julia Blake), who he thinks is his dead mother, to help him remember the important things in his life and to finally give him the chance to say goodbye to all that he has lost.

A Month of Sundays is a funny and touching Australian film set in Adelaide. It is a refreshing story that highlights the importance of home and family. Parental guidance is recommended for 8-12 year olds, and the film is most suitable for aged children 12 years and older, due to the coarse language and mature themes.

The main messages from this movie are to remember to tell the people you love that you care about them and not to take your family for granted.

This movie could also give parents the opportunity to discuss the different ways of dealing with grief and loss, and how some may be less healthy than others (for example, Frank’s dependence on cigarettes).