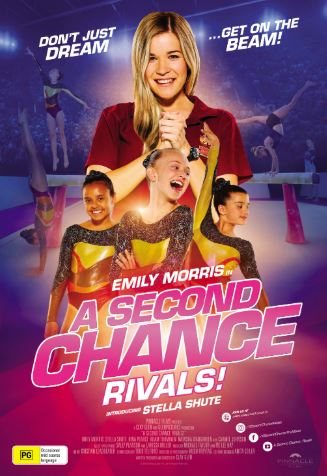 A Second Chance: Rivals! is a sequel to the 2011 Australian family drama A 2nd Chance, featuring many actors from the original cast. Set ten years after the events of the original movie, former world-class gymnast Maddie Cornell (Emily Morris) is in a personal crisis after a serious accident on the beam ended her Olympic dream. In order to recover physically and emotionally, Maddie seeks refuge in the South Australian countryside, staying with family friend Beverly (Carmel Johnson), who coaches the local gymnast team. Reluctant at first, Maddie agrees to coach the young competition team and train them up for the national championships. A lot of hard work lies ahead for the young country girls if they want to beat their archenemies from the city.

It is unlikely that children aged 13 and over will be frightened or distressed by this movie.

A Second Chance: Rivals! is a predictable, yet charming and entertaining, sequel to its predecessor from 2011. Like the original, this coming of age family drama features impressively talented junior gymnasts and gives an insight into the world of competitive junior sport, its promises of glory and success, but also its risks and sacrifices. With the cast being almost exclusively female and following a group of 12-year-old gymnasts, this movie is likely to appeal mostly to female tweens and teens.