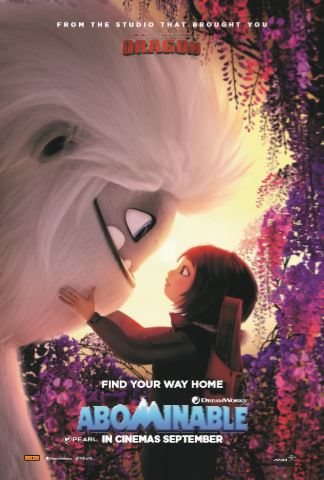 Not suitable under 6 and parental guidance to 8 (animated violence, scary scenes and themes)

Yi (voice of Chloe Bennett) and her father had always planned to travel around China together so when he unexpectedly dies Yi busies herself by working every job she can to save money and take that trip to honour her father’s memory. She is too busy to grieve and too busy for her mother (voice of Michelle Wong) and grandmother (voice of Tsai Chin) who worry for her. Meanwhile, Mr Burnish (Eddie Izzard) of Burnish Industries has spent a lifetime trying to prove the existence of the illusive Himalayan Yeti. Burnish and his employees, headed by the evil Dr. Zara (voice of Sarah Paulson), find a Yeti but it escapes days before the public reveal. Yi discovers the injured Yeti hiding on her rooftop and soon realises he is in trouble. Naming him “Everest” and vowing to help him find his way home, Yi sets off with her reluctant cousins Peng (voice of Albert Tsai) and Jin (voice of Tenzing Norgay Trainor) on an epic journey across China to help Everest (voice of Joseph Izzo) find his family. Along the way they all learn some powerful lessons about love and life and the incredible difference just one person can make.

Death of a parent, family alienation by failure to deal with grief, cruelty to endangered species and animal distress.

It is unlikely this movie will frighten children over the age of thirteen.

Abominable is an action packed, animated, adventure with powerful messages about life, loss and finding home. The film is suitable for families, however, some scenes may scare or disturb very young children.

The main messages from this movie are to help others, to follow your dreams, to love your family and to realise that when you set your mind to something anything is possible.