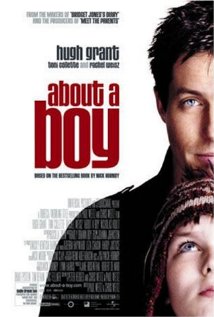 Not recommended under 15 (Lang. Sex. Themes)

Will Freeman is living his life ‘as an island’. He has no responsibilities or ties and his only motivation in life is to find women to sleep with on a strictly casual basis. His income is derived from the royalties of a one hit wonder song his father wrote about 40 years ago. In order to meet single mothers, whom he sees as a good potential source for sex, he joins a single parents’ support group inventing a two year old son. There he meets Christine who introduces Will to her friend Fiona and son Marcus.

Marcus turns Will’s life around by showing him how vain and empty his life really is. Marcus befriends Will against Will’s wishes by visiting him daily after school. Marcus sees Will as the father figure he longs for and hopes will go out with his mother. Fiona is a music therapist/hippy who suffers from depression. One day after Will goes on an outing to a park with Christine, her son and Marcus (where Marcus accidentally kills a duck) they return to Marcus’s flat to find Fiona, slumped on the sofa having attempted suicide. She survives but this leaves a lasting impression on Marcus who only wants his Mum to be happy.

Marcus is also bullied at school because he is a little different and Will helps him to ‘blend in’ more with the others by buying him a cool pair of trainers. Will comes to realise that Marcus is the only person he has ever really cared about and this changes him from being a totally self absorbed, vain person to a more likeable, humane one and the boy helps the man grow up.

Attempted suicide of mother. Marcus arrives home to find his mother slumped on the sofa with vomit all over her.

There are quite a lot of sexual references in this film as Will is always trying to get females into bed although they are mainly verbal references not visual. Will talks about single mothers as being available for passionate sex. Marcus also likes a girl in the film and Will talks to him about sex although not in much detail.

There is frequent low level course language as well a couple of uses of the word fuck. Other words used frequently include bloody, Jesus Christ, God, shit, sod, sodding, crap, bugger, piss, bastard, asshole and shag. In addition Will makes crude comments such as he’d “rather eat a dirty nappy” and might as well “cut my own penis off”.

The main theme of this film is that “no man is an island” and that people really do need other people to make their life worthwhile.

This film portrays many values that are harmful and hurt others, showing them to be ‘bad’ such as: