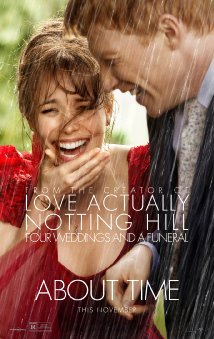 Not recommended under 15 due to coarse language and sexual references.

Richard Curtis’ About Time is a poignant and heart-warming romantic comedy about love, taking chances and having the power to shape your own future. After Tim Lake (Domhnall Gleeson) turns 21, his father (Bill Nighy) informs him that the men in their family can travel in time. Although they cannot alter history or significant historical events, his father tells Tim to use his power to create the life that he truly wants. At first, Tim attempts to relive specific situations to make his sister’s beautiful friend Charlotte (Margot Robbie) fall in love with him. However, he discovers that he cannot change all things when she fails to fall for him irrespective of his time travel.

Upon moving to London where Tim stays at his Uncle Harry’s (Tom Hollander) house, he meets a girl named Mary (Rachel McAdams) on a blind date. He immediately falls for her, and they exchange details with the hope of seeing each other again. However, after using his power to change history and help his uncle, Tim realises that Mary’s phone number has been lost from his phone and that the date he remembers no longer look place in reality. Tim travels back in time to meet Mary once more, and they fall quickly in love with one another.

Although Tim’s life with Mary and their daughter is perfect for quite some time, he eventually learns that his father has terminal cancer. Tim travels back after his death to visit him and extend their time together. However, Mary falls pregnant with their second child and Tim realises that he has to put an end to time travelling.

Tim’s father dies of cancer – none of this is shown on screen but the characters attend a funeral for him.

About Time is a charming film about love, loss and living in the moment. Coarse language and sexual references make it unsuitable for children and younger teens, but it has plenty to interest and entertain those aged 15 and over. Tim’s journey reflects the innate desire of human beings to connect with another individual who will accept you unconditionally and be a partner in every aspect of life. Although cloaked with the fantasy concept of time travel, this film ultimately speaks to the importance of making the right choices to shape your life, and of making the most of life.