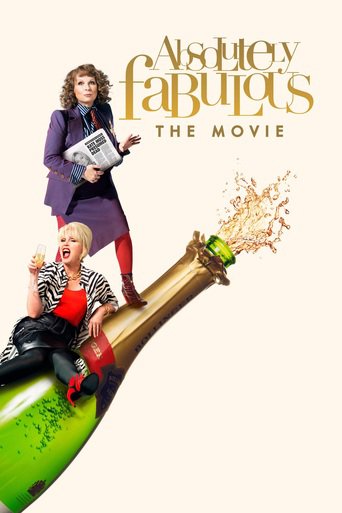 Not recommended under 15 due to themes, coarse language, sexual references and substance use.

The queens of superficiality, Patsy Stone (Joanna Lumley) and Edina (or Eddie) Monsoon (Jennifer Saunders) are down on their luck. Eddie’s ex has cancelled her credit cards,  her autobiography has just been rejected by the publishers, and her PR business is diminishing. The ageing Patsy is no longer attracting men and  therefore her source of income has gone. Eddie plans to resurrect her career by making Kate Moss her new client. However, in the haste to speak with Kate at a fashion extravaganza, Edina accidentally pushes her from a balcony into the river.

Kate Moss is now presumed to be dead and Edina is the target of hate mail and Twitter trolls. Eddie and Patsy have to disappear and flee to the South of France, hoping to convince a wealthy old flame to marry Patsy. Charlie (Barry Humphries) however, now has the company of many scantily clad young women on his yacht and has no need of Patsy. Patsy then has to come up with another inventive way to make money and, disguised as a man, she woos a wealthy old widow. The law finally catches up with them, however, and it seems that their doom is sealed when luck intervenes in the form of a living Kate Moss.

There is some violence and accidental harm in this movie, mostly played for laughs, including:

There is a lot of substance use in this movie, including:

Absolutely Fabulous: The movie is a comedy about two sad, ageing women who are still trying to ‘live the dream’. It is full of cameos, clichés, stereotypes and an unoriginal storyline. Even the cameos fail to save the day. It will appeal to viewers of the television show of the same name but is likely to disappoint. The themes, coarse language, sexual references and substance use make it unsuitable for children under 15.

The main messages from this movie are that shallowness and superficiality will ultimately bring you down.

Parents may wish to discuss the mean-spiritedness of the main characters trying to extract money by devious means. While this was played for comedy, it is of course a terrible thing to do.