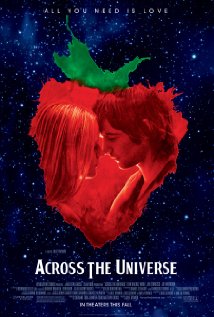 Not recommended under 13, PG to 15 (Themes, disturbing scenes, drug references)

Across the Universe is a lively musical set in the 60’s. It interweaves the songs written by the Beatles with the story of Jude (Jim Sturgess) who travels across the Atlantic from Liverpool to the USA to find the father he has never known. Jude is befriended by a college dropout, Max (Joe Anderson), who introduces Jude to his sister Lucy (Evan Rachel Wood). Jude and Max move to an apartment in New York together.
After Lucy’s boyfriend is killed in Vietnam she joins Max in New York and she and Jude fall in love. Jude tries to make a living as a graphic artist while Lucy is studying at university. The plot turns serious when Max is called up to fight in the Vietnam War. Lucy joins the Vietnam moratorium marches but gets caught up in a radical anti-war movement that goes further than she had expected. Her political activity separates her from Jude who is arrested in a riot and sent back to Liverpool.
Unable to resume his life in Liverpool and forget Lucy, Jude returns to America to see if he can rekindle their relationship.

Some children in this age group could be disturbed by the violence and the anti-authoritarian culture in this movie.

Across the Universe is a colourful, highly original musical that captures the essence of the late 1960’s. The imagery is very powerful and surreal at times, capturing both the peace-loving, free-thinking spirit of the time and the turbulence of anti-war riots and the terrible realities of war.
This movie could give parents the opportunity to discuss with their children attitudes and behaviours, and their real-life consequences, such as: