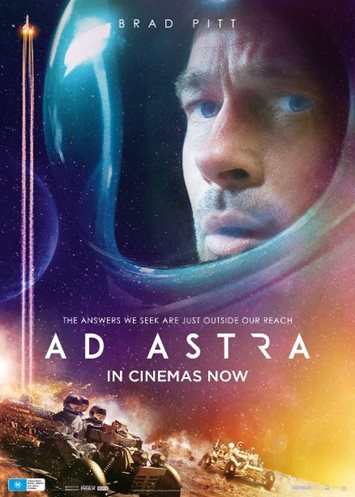 Not suitable under 12; parental guidance to 13 (violence, scary scenes and lack of interest for younger viewers)

Set in the near future, a global power surge on Earth causes over 43,000 deaths and the military suspect an extra-terrestrial attack. Astronaut Roy McBride (Brad Pitt) is therefore sent on a mission to find his missing father, Dr Clifford McBride (Tommy Lee Jones). 30 years earlier Clifford McBride had led a team to search for life near Neptune and hadn’t been heard from since. Actually suspecting Clifford might be responsible for the attack, the military want him dead.

Roy’s mission first lands on the Moon where Roy undergoes a psychological examination to see whether he is fit for the task. The decision is made that Roy is too emotionally attached to his father and the authorities plan to send him home. Roy, however, manages to smuggle onto the spacecraft that’s heading for Saturn to find Clifford. In doing so, Roy breaches the oxygen supply and accidentally kills all the crew on board. Roy finally reaches his destination and finds his father. Roy’s intention is to take his father home but things do not turn out as planned.

Ad Astra is a fantasy/science fiction movie set in the near future. Much of the dialogue is muted by the spacesuits and Roy narrates a lot of the story as it goes along. It is very slow moving and doesn’t have much of a plot. The movie mainly centres on the relationship between Roy and his missing father, therefore, it isn’t recommended for under 13’s and the violence and scary scenes render it unsuitable under 12.

The main message from this movie is the need for a strong bond between parent and child.