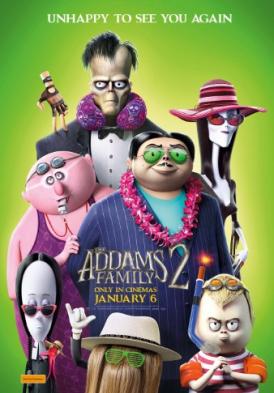 Not suitable under 6; parental guidance to 9 (violence, themes, imitative behaviour)

After an outstanding presentation at a school fair, Wednesday Addams (voice of Chloe Grace Moretz) feels jilted by the fact that her breakthrough contribution to science was ignored and that every student was given a prize merely for participating. Disgruntled by the snub, she is not appeased by the keen interest shown by Dr Cyrus Strange (voice of Bill Hader), a mad scientist obsessed with genetic mutations. Wednesday is mortified by the fact that her family has disobeyed her instructions not to attend the fair, along with the fact they are responsible for inadvertently setting the entire place on fire. Wanting nothing to do with her unusual family, she seeks to maintain her distance at all times. However, this drives her father, Gomez (voice of Oscar Isaac), to organize a family road trip in an effort to bring them closer together. Wednesday’s mother, Morticia (voice of Charlize Theron), recognises her daughter’s need for solitude but goes along with her husband’s plan to see the States in an Addams-style mobile home. They are joined by Wednesday’s brother, Pugsley (voice of Javon “Wanna” Walton), the children’s Uncle Fester (voice of Nick Kroll) and their servant Lurch (voice of Conrad Vernon). Cousin It (voice of Snoop Dog) also makes a brief appearance. While the family enjoys their own adventures at such iconic spots as Niagara Falls, The Alamo, Death Valley and the Grand Canyon they are relentlessly pursued by a lawyer (voice of Wallace Shawn) acting on behalf of Dr Strange, who claims that Wednesday is his long-lost daughter and who does everything in his power to destroy the Addams family and end their relationship with Wednesday. Wednesday’s response goes to show that even though her family is unusual, there are some bonds that cannot be broken.

The Addams Family 2 (a standalone sequel to the 2019 film, The Addams Family) is an animated adventure with a predictable plot and lots of crude humour, often involving poo: lion poo, driving into a massive pile of poo, being blown out of the Grand Canyon on a port-a-potty and Uncle Fester having an “accident”. This is a film that will be best enjoyed by slightly older children and fans of the Addams Family. Not suitable under 6 and parental guidance to 9.

The main messages from this movie are to be true to yourself even when you are different from everyone else; that great thinkers need obstacles to function; and that the invisible bonds that bind a family are far stronger than we may imagine.